Undersampling Will Change the Base Rates of Your Model’s Predictions

In classification problems, the proportion of cases in each class largely determines the base rate of the predictions produced by the model. Therefore if you use sampling techniques that change this proportion, there is a good chance you will want to rescale / calibrate your predictions before using them in the wild.

TLDR: In classification problems, under and over sampling1 techniques shift the distribution of predicted probabilities towards the minority class. If your problem requires accurate probabilities you will need to adjust your predictions in some way during post-processing (or at another step) to account for this2.

My examples will appear obvious to individuals with experience in predictive modeling with imbalanced classes. The code is pulled largely from a few emails I sent in early to mid 20184 to individuals new to data science. Like my other posts, you can view the source code on github.

Note that this post is not about what resampling procedures are or why you might want to them5, it is meant only to demonstrate that such procedures change the base rates of your predictions (unless adjusted for).

The proportion of TRUE to FALSE cases of the target in binary classification problems largely determines the base rate of the predictions produced by the model. Therefore if you use sampling techniques that change this proportion (e.g. to go from 5-95 to 50-50 TRUE-FALSE ratios) there is a good chance you will want to rescale / calibrate6 your predictions before using them in the wild (if you care about things other than simply ranking your observations7).

In this dataset we have a class imbalance where our target is composed of ~5% positive (TRUE) cases and ~95% negative (FALSE) cases.

Association of ‘feature’ and ‘target’

We have one important input to our model named feature10. 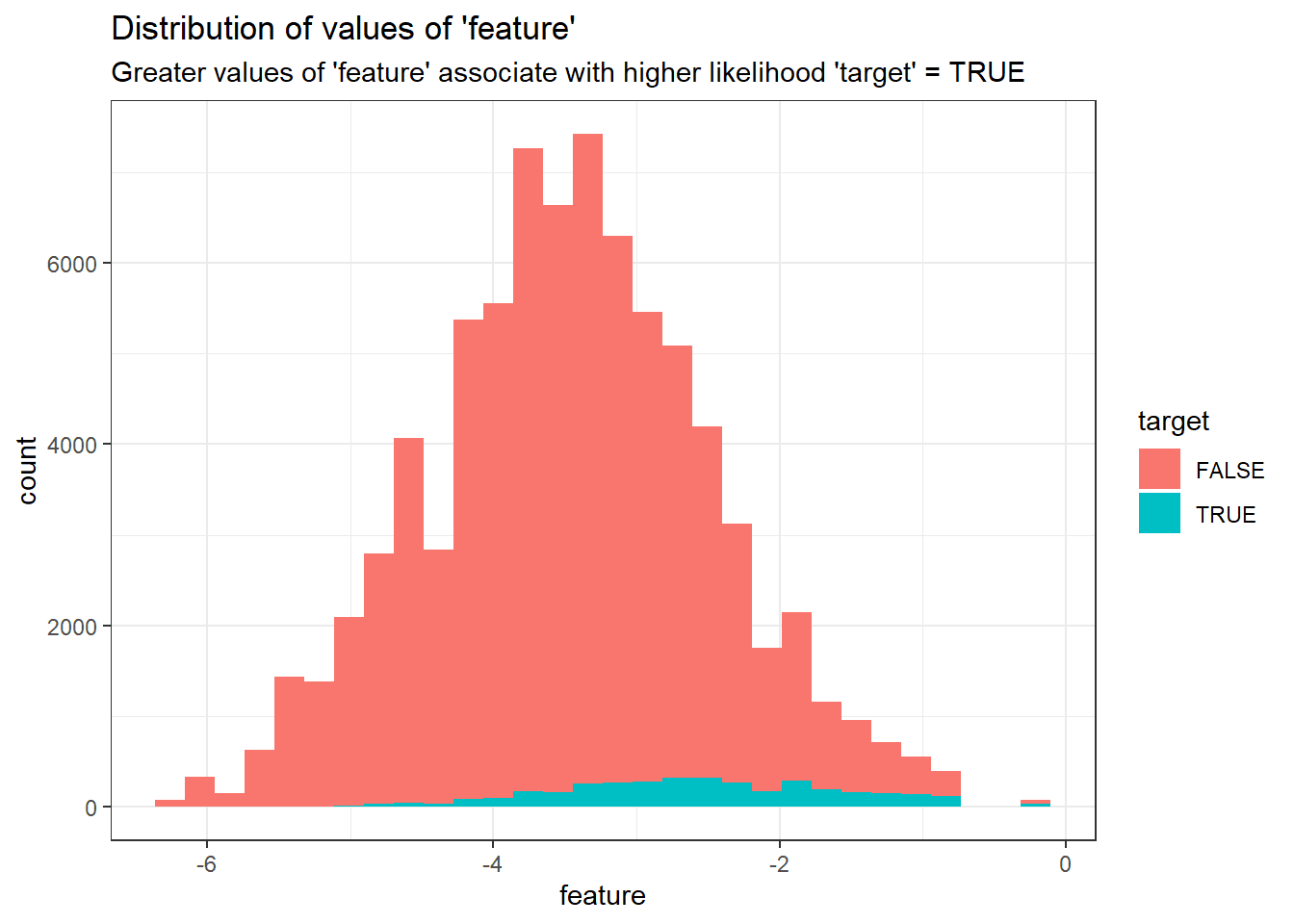 Make a new sample train_downsamp that keeps all positive cases in the training set and an equal number of randomly sampled negative cases so that the split is no longer 5-95 but becomes 50-50.

See below for what the distribution of feature looks like in the down-sampled dataset. 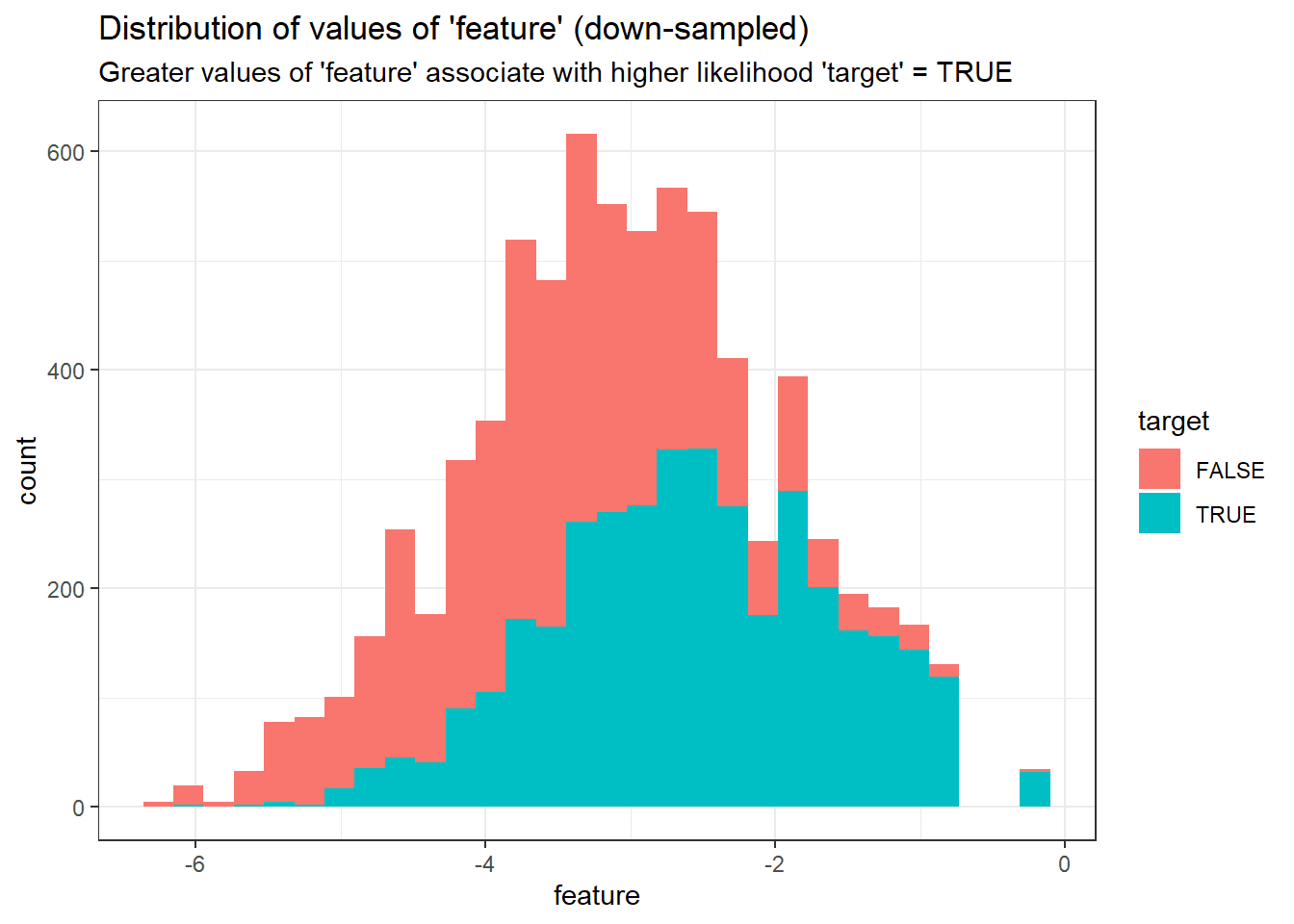 Train a logistic regression model to predict positive cases for target based on feature using the training dataset without any changes in the sample (i.e. with the roughly 5-95 class imbalance).

Add the predictions from each of these models11 onto our test set (and convert log-odd predictions to probabilities).

Visualize distributions of predicted probability of the positive and negative cases for each model. 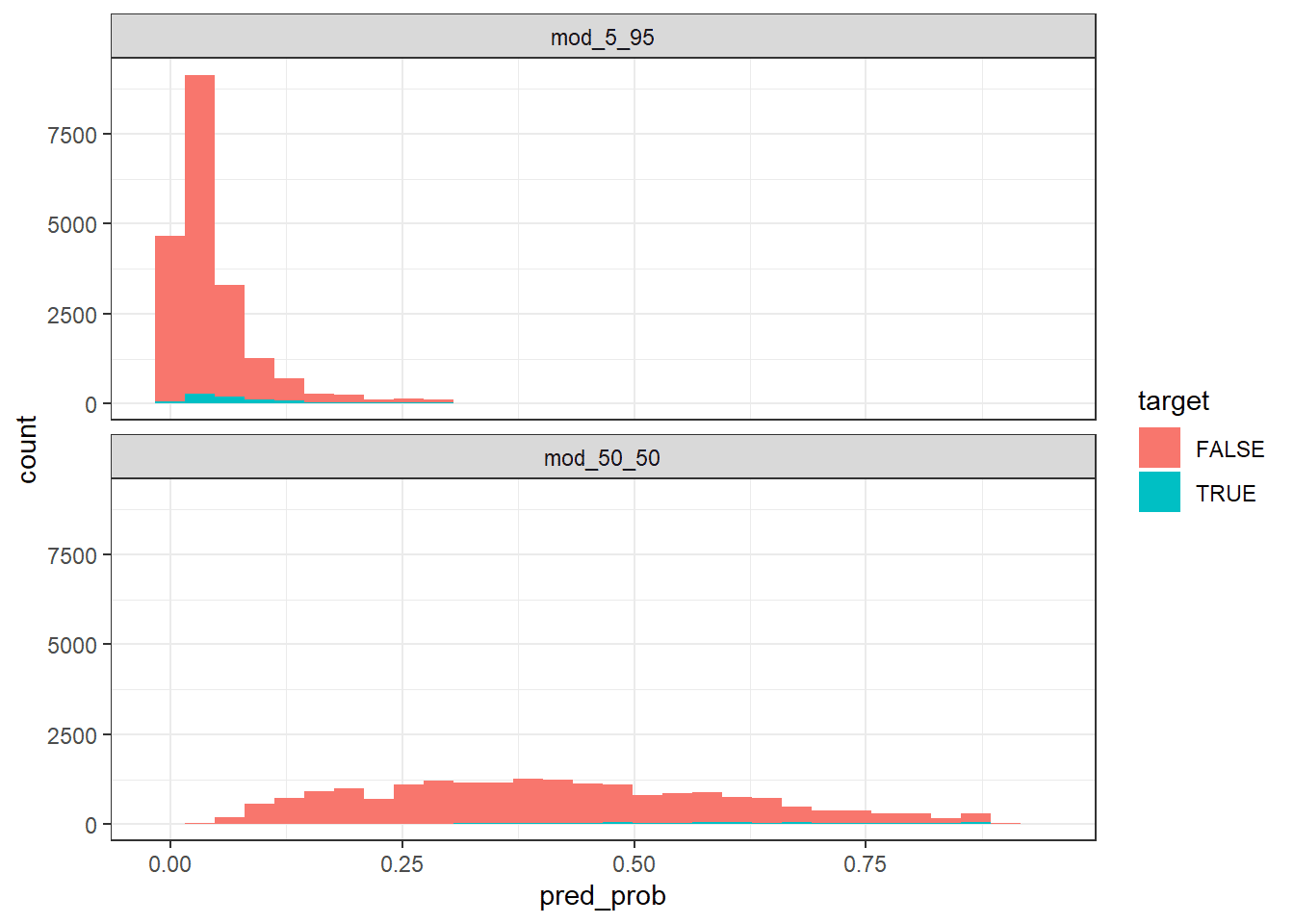 The predicted probabilities for the model built with the down-sampled 50-50 dataset are much higher than those built with the original 5-95 dataset. For example, let’s look at the predictions between these models for a particular observation:

This shows that when feature is equal to -2.77, the model built without undersampling produces a prediction of 6% whereas the model built from the undersampled data would predict 56%. The former can be thought of as the predicted probability of the event whereas the latter would first need to be rescaled.

Isotonic Regression13 or Platt scaling14 could be used. Such methods are used to calibrate outputted predictions and ensure they align with actual probabilities. Recalibration techniques are typically used when you have models that may not output well-calibrated probabilities15. However these methods can also be used to rescale your outputs (as in this case). (In the case of linear models, there are also simpler approaches available16.) 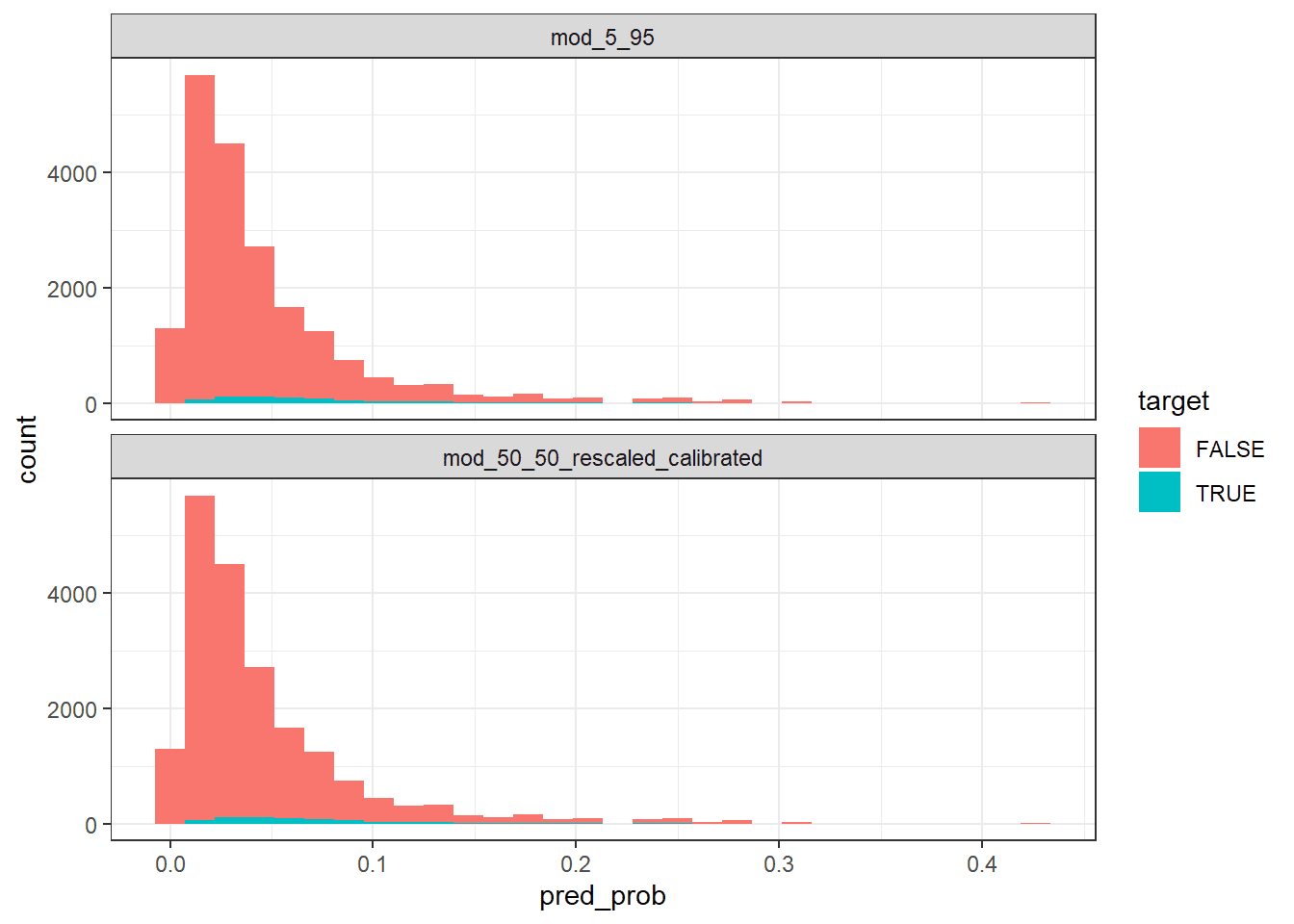 Now that the predictions have been calibrated according to their underlying base rate, you can see the distributions of the predictions between the models are essentially the same.

Rebuilding plots but using density distributions by class (rather than histograms based on counts). 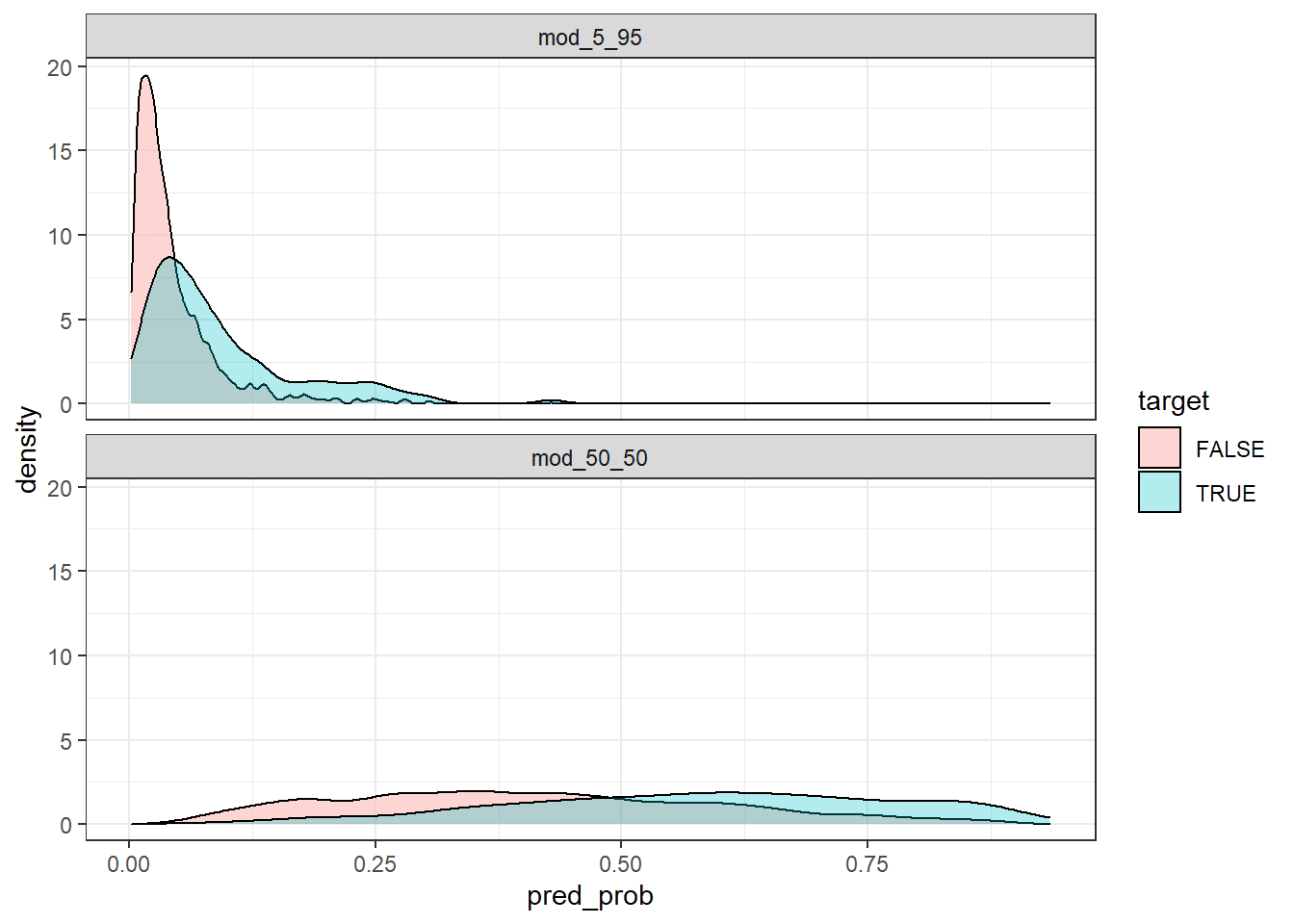 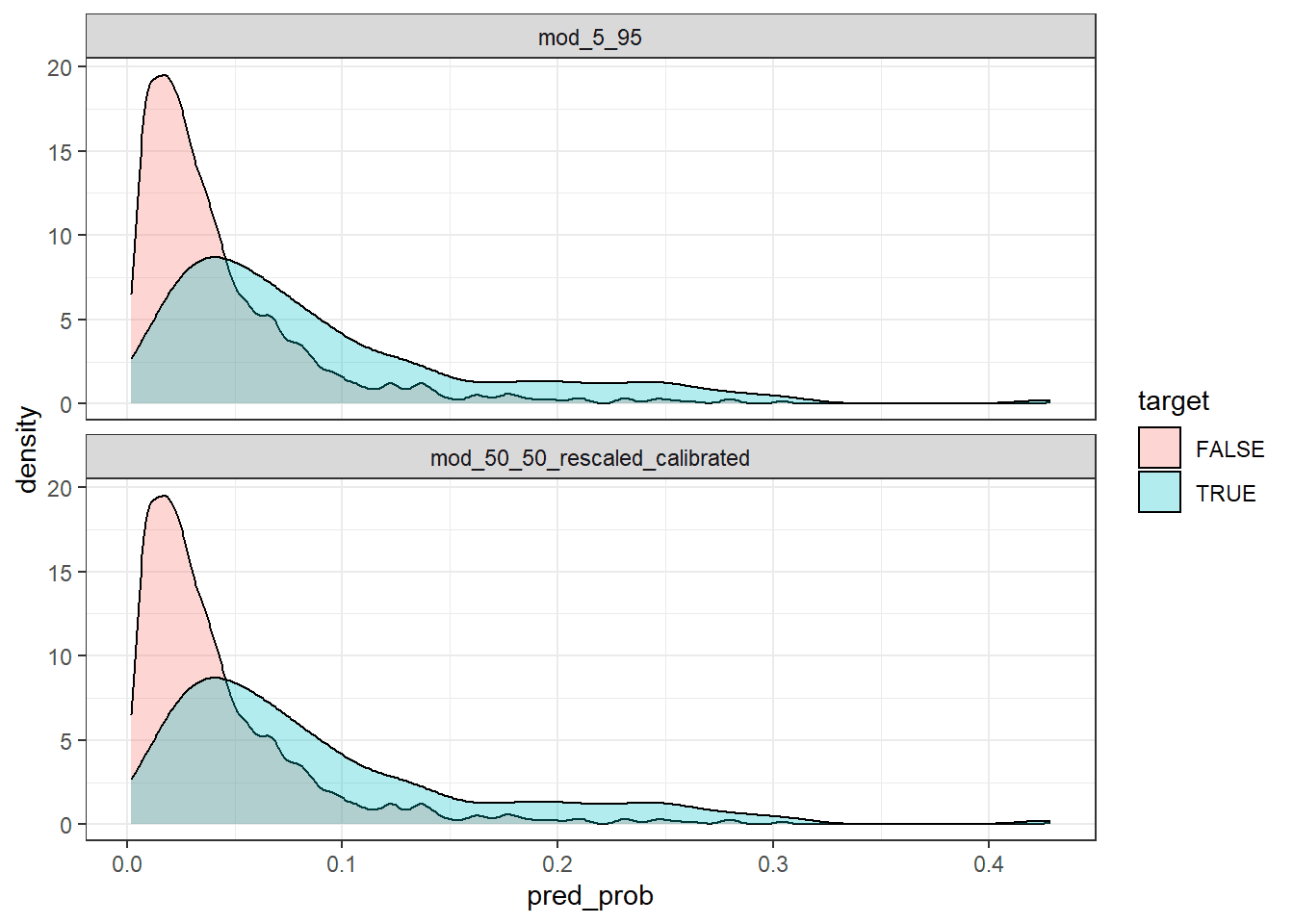 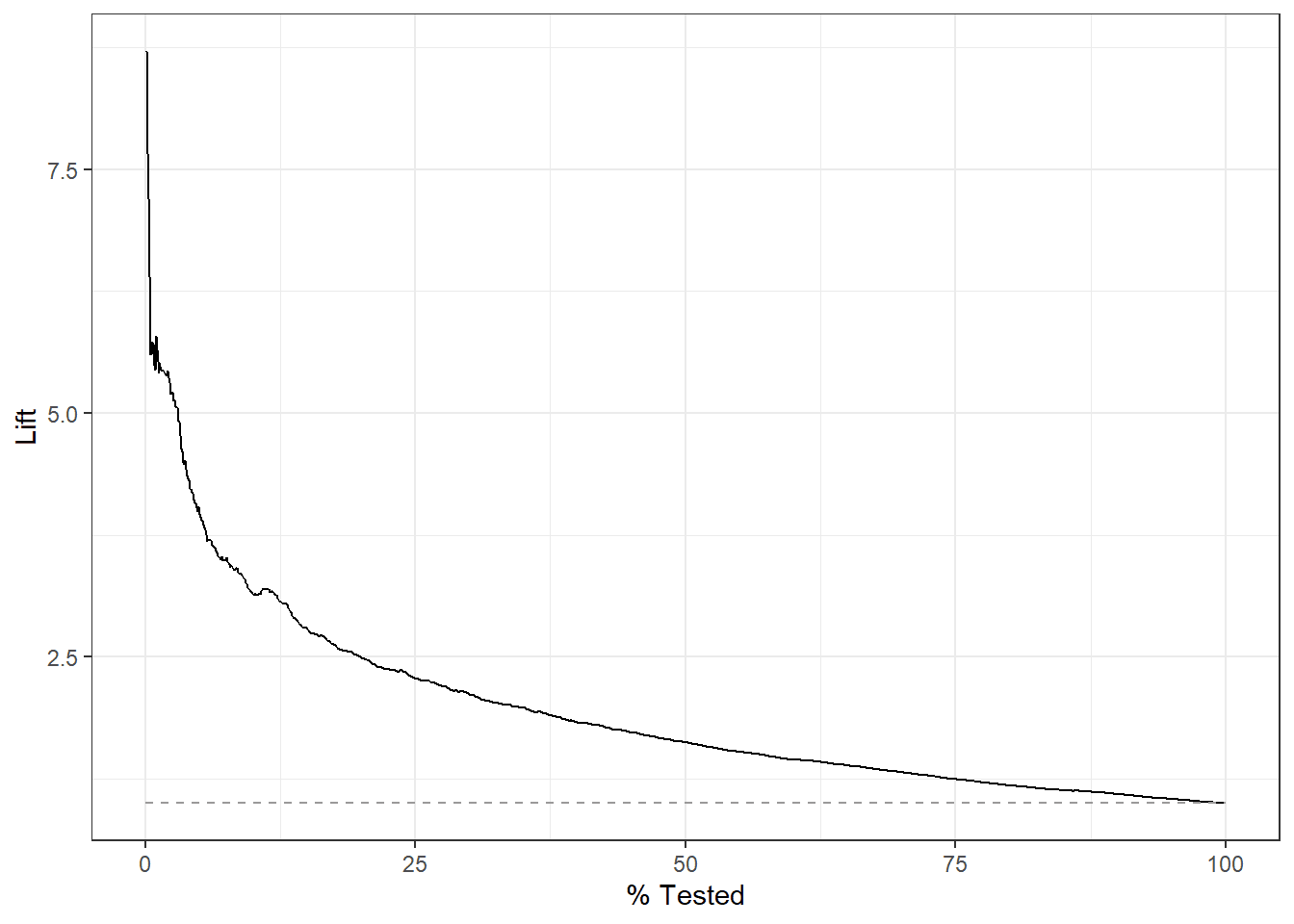 Thanks to Andrew Wheeler for his helpful disqus comment referencing another method for rescaling which prompted me to create a quick gist comparing platt scaling against using an offset/adjustment approach for rescaling. 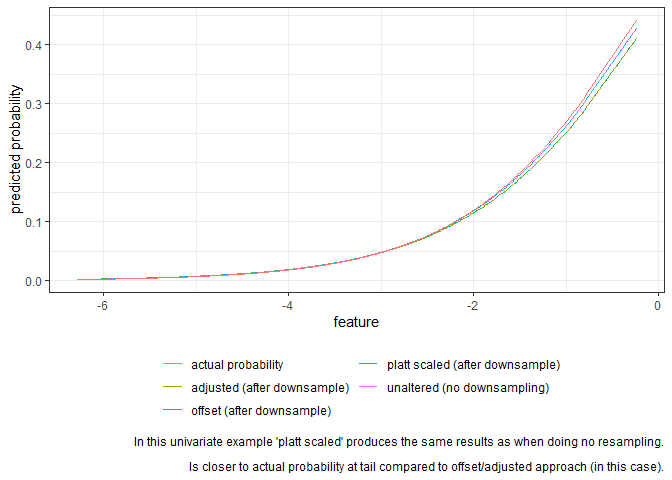 Bio: Bryan Shalloway is a Data Scientist at NetApp. You can read more of his writing at bryanshalloway.com or connect with him on Twitter @brshallo.