How Much Do Data Scientists Make in 2022?

The data scientist salary - the past, the present, and a little bit of the future.

By Nate Rosidi, KDnuggets on February 25, 2022 in Career Advice 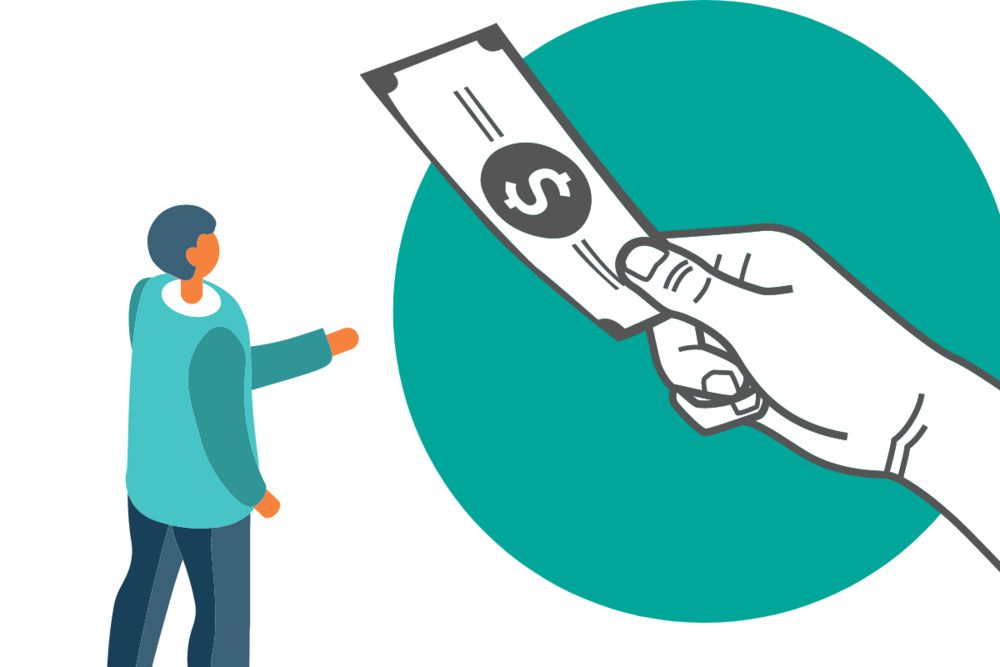 Data scientists were still high in demand during 2021. The re-shaping of the world in the last few years, where it’s evident that we’ve become data-dependent, was the primary force behind the data science popularity.

To lure the top data scientists, the companies are now intensively competing, thus making data science a highly paid career. How high, that’s the question I’ll try to answer in this article.

To do that, I’ll present you with some data regarding the data scientists’ salary. I won’t talk too much. Or write, in this case. I’ll let the numbers and graphs do the most of the talking.

I’m sure you already know it’s not easy to answer how much you could earn as a data scientist. Your pay depends on many factors, such as level of education, seniority, technical knowledge, industry, company size, location, and negotiation skills.

In this analysis, I’ve focused on three main factors:

All data presented in the graphs and tables is from Glassdoor, as of Feb 3, 2022.

The analysis will concentrate on data science as a job title. There are, of course, more job roles that belong to the family of data science. Those are data analysts, data engineers, machine learning engineers, and plenty more. I’ll give a general data overview of all those jobs in summary.

But the pay analysis according to the seniority, industry, and company size will only be for a data science job position.

The pay shown will be an average base salary. This means the actual total compensation is a little bit higher. To get the feeling of how much that is, I also prepared the graph that shows the average total compensation for the 20 most popular companies on Glassdoor. Popularity, in this case, means the number of data science salaries submitted to the site.

All data is for the United States.

As you would probably expect, the pay generally rises with the data scientist’s experience, regardless of the industry. 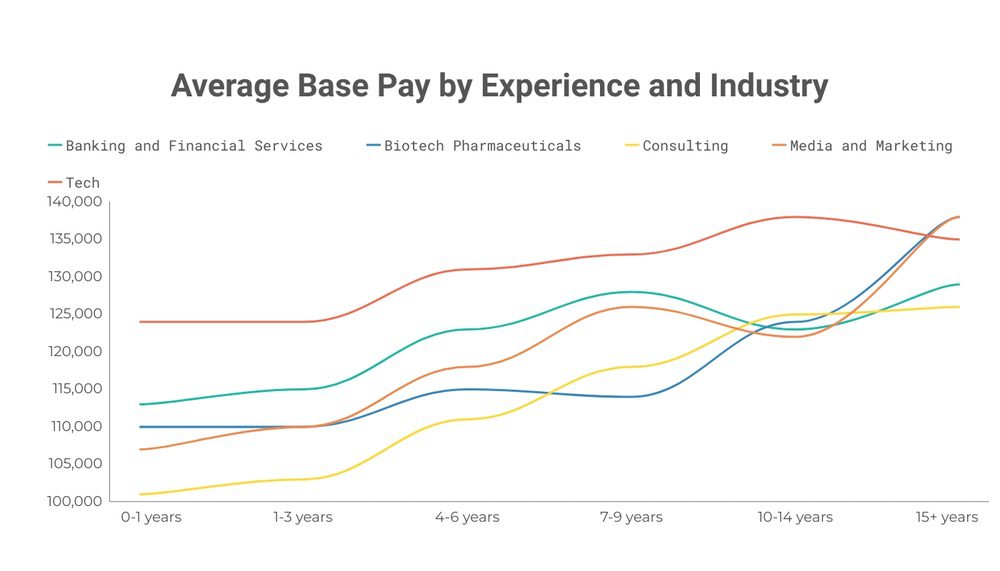 The highest pays are, also expected, in the Tech Industry. The data scientist salary here is virtually unchanged in the first three years of experience. But these starting points are significantly higher than in other industries. For every experience category, the pay in the Tech Industry is the highest. The only exception is 15+ years. Data show this is probably due to the tech companies' significantly lower need for the most experienced staff compared to the total number of their data science jobs. They have the highest demand for data scientists with 0-1 and 1-3 years of experience.

Banking & Financial Services, Biotech & Pharmaceuticals, and Media & Marketing come second, third, and fourth. Interestingly enough, the drop in salaries for data science employees with 10-14 years of experience in all three industries show (and data backs this up) these are the professionals needed the least. Then the demand for the most experienced data scientists rises significantly, especially in Biotech & Pharmaceuticals and Media & Marketing. If you’re a data scientist executive, you’ll earn the most in these industries.

Consulting pays the least, especially for those with 0-1 and 1-3 years of experience. Considering the pay rise, working in consulting is the most beneficial if you’re somewhere in the middle experience-wise. Still, it pays the least, compared to other industries. 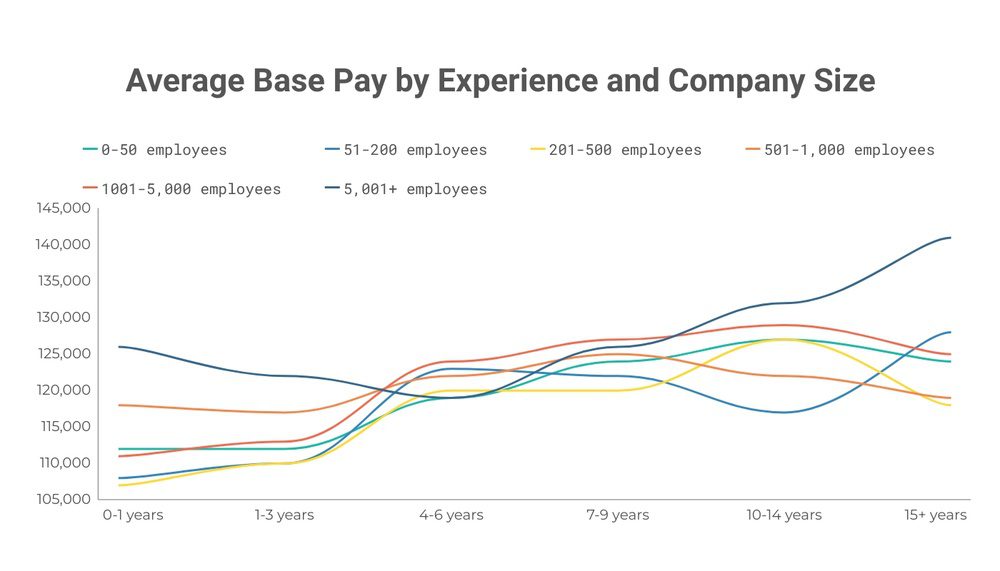 The highest paying companies are also the biggest ones, which is hardly surprising. Compared to other companies, the best period to work in such companies is when you have up to three years or more than seven years of experience. If you’re in between, you’ll get paid more in any other company with fewer employees.

If you’re somewhere between 4-9 years of experience, companies with 1,001 to 5,000 employees become the best choice. Not bad with more experience, either, but comparatively worse for the most experienced employees.

The same goes for all other company sizes, with two exceptions: the largest companies and those with 51-200 employees. Those are the highest-paying companies if you’re at the executive level.

Data Scientist Salary by the 20 Most Popular Companies

The first two graphs showed the highest average base salary for the most experienced data scientists is around $140k. To get a better feeling of how much you get paid, here’s the overview of the average total pay, meaning it includes all the bonuses on top of the base pay. 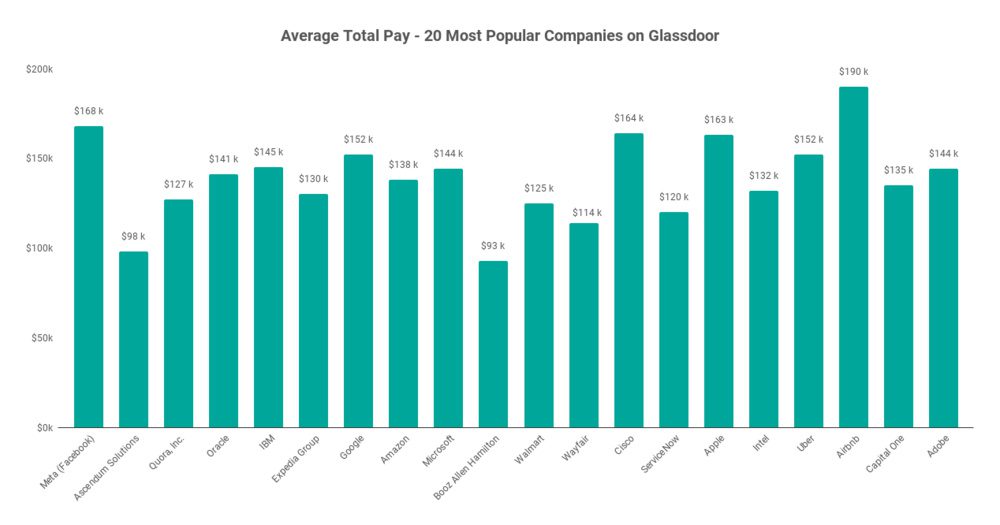 Uber and Google are tied at the fifth place; they both pay $152k on average.

While they are not the most popular only because they pay so much, it surely contributes to their popularity. Compared to the $140k I mentioned above, these six companies pay significantly more than that. If you consider that the US average data scientist salary is $117k, it’s no wonder these companies are so popular.

What Does the Future Bring?

The data I presented shows how much data scientists have earned until now.

While predicting exact numbers is impossible, I would say it’s a sure bet if you count on salaries at least remaining the same in 2022.

This is also probably a way too conservative prediction. Bar the years 2016 and 2021, data from Glassdoor show that the number of data science job openings has been on a constant rise. In 2022, there’s a 70% rise compared to 2021 already, and the year has just started.

Applied to the current average base salary of $117k, it could increase to $140k. The average salary in 2022 for the least experienced scientists could be $120k in the lowest-paying industries up to $148k in the highest paying industries. The most experienced ones could end up with salaries from $151k to $166k.

Mind you, this is only the base salary. Seeing the increase in job offerings, I would say this is even a conservative projection.

The data scientist salary increase has to be worked towards. This applies to every experience level, especially those with 0-3 years of experience. The attractiveness of data science will also lead to increased competitiveness amongst the candidates over time. In this world, platforms such as StrataScratch could become more important for anybody wanting to prepare for the job interview and increase their chances of getting a job in data science.

I also recommend checking out this article “How Much Do Data Scientists Make?” to find out about salaries in Data Science as well as how they are influenced by various factors.

Instead of the summary, here’s the overview of the average base pay for the 14 job positions that belong to the data science family. With this, you get a more complete picture of how well different jobs in data science pay.