Reinforcement Learning and the Internet of Things

Gain an understanding of how reinforcement learning can be employed in the Internet of Things world. 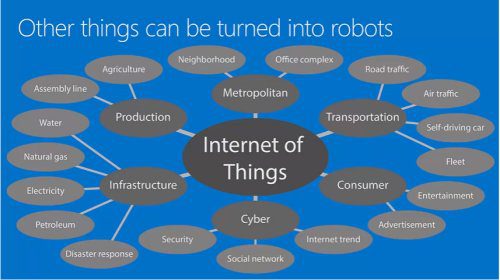 Also, if you follow my tweets and work, I like the work of Senior Data Scientist Brandon Rohrer at Microsoft. For example, a three part blog I have often referred to: Which algorithm family can answer my question

This blog is based on an open source initiative from Brandon called Becca which acts as a ‘general purpose brain for houses and robots and other things’. Becca is a personal initiative and completely Open sourced. It is not associated with a company and is free to download and use under the MIT license. Becca is based on a toy algorithm which is an improvement over traditional Reinforcement neural networks. In exploring Becca through the Open Source code and other videos, we have a great example of how IoT could engage with Reinforcement learning. This post is written by me and also Pragnesh Shah who is exploring this theme in the course with me.

A brief overview or Reinforcement Learning

Reinforcement learning is learning what to do i.e. how to map situations to actions--so as to maximize a numerical reward signal. Unlike most forms of machine learning, the learner is not told which actions to take. Instead, the learner must discover which actions yield the most reward by trying them. Actions may affect not only the immediate reward but also all subsequent rewards. Thus, the two characteristics: trial and error search and delayed reward are the two most important distinguishing features of reinforcement learning.

Reinforcement learning works in a cycle of sense-action-goals. Because reinforcement learning learns from immediate interaction with the environment, it is different from supervised learning (learning from examples provided by a knowledgeable external supervisor).  The interactive learning approach is beneficial in navigating in uncharted territory. Here, ‘uncharted territory’ refers to situations where we

One of the challenges that arise in reinforcement learning and not in other kinds of learning is the trade-off between exploration and exploitation. The agent must perform both exploration and exploitation simultaneously.  At the same time, the agent must consider the whole problem and operate in an environment of uncertainty.
For example, when applied to IoT: An adaptive controller adjusts parameters of a petroleum refinery's operation in real time. The controller optimizes the yield/cost/quality trade-off (i.e. the end goal) on the basis of specified marginal costs (i.e. learning by interaction with its environment) without sticking strictly to the set points originally suggested by engineers. The agent improves its performance over time

Explaining the problem to be solved for IoT

Previously, Sibanjan Das and I have addressed this problem on kdnuggets (Deep Learning – IoT – H2O)  where we said:

Deep learning algorithms play an important role in IOT analytics. Data from machines is sparse and/or has a temporal element in it. Even when we trust data from a specific device, devices may behave differently at different conditions. Hence, capturing all scenarios for data preprocessing/training stage of an algorithm is difficult. Monitoring sensor data continuously is also cumbersome and expensive. Deep learning algorithms can help to mitigate these risks. Deep Learning algorithms learn on their own allowing the developer to concentrate on better things without worrying about training them.

This idea can be expanded in terms of Becca as below by viewing a house as a Robot based on Reinforcement learning.

The ‘Brain’ for such as system can be ‘rule based’ or algorithm based (based on learned behaviour) addressing questions such as:  Which action is most relevant here? i.e. Should I raise or lower the temperature? Should I vacuum the living room again or stay plugged in to my charging station?

Should I brake or accelerate in response to that yellow light? Etc.

Instead of rule based algorithms or algorithms based on learned behaviour(ex supervised learning algorithms), the application of Reinforcement Learning to this scenario is even more interesting -  because not all rules can be set in advance. Further, the ‘rules’ can be discovered by interacting with the environment through sensors for optimizing the long term/delayed reward.

However, in practise, this scenario has many challenges:

Consider a smart thermostat
The Sensor is the Thermometer
The Actuator is the Heater switch
The ‘World’ comprises of Heater, ducts, rooms, walls, weather

The Cycle takes 10 minutes
Once we are through the loop i.e. after 10 mins,  the temperature measured at 68 degrees

The next time the heater switched on for 10 minutes (arbitrarily)
The temperature is measured at 70 degrees
We put these readings in a table. And observe how many times this has occurred
We also add to this the estimate of the probability that each measurement has occurred

Thus, you build up the table

This represents a model and can be used for any scenario 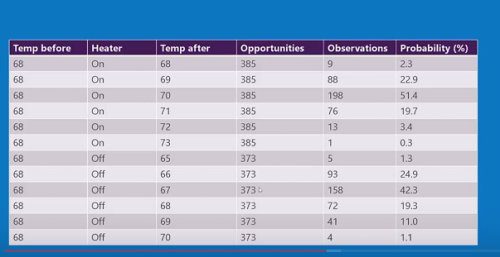 Answering the challenge of reinforcement learning algorithms, we have

The Caveat is: For a whole house this includes

Thus, this implementation is suited for: Large databases, Cloud processing and Data lakes. You can see this in the wider context A methodology for solving problems with Data Science for Internet of Things.

The basic action is still the same as Reinforcement learning as we see below: 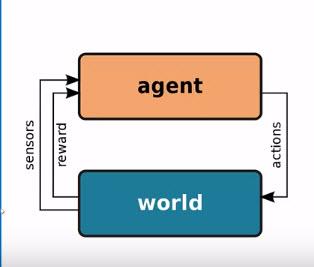 The question is: To what extent can IoT ecosystems be turned into Robots (as described above)?

Also the same reinforcement learning based model can scale to  neighbourhoods, transports, media, social networks etc – anywhere people and sensors are involved and their interaction(i.e. rule formation) is hard to predict.

We have the sensors and we have the actuators – we are just missing the brain.

To conclude, we discuss here an enhancement to  a Reinforcement algorithm – but in doing so – I see one the best ways I can illustrate Reinforcement learning networks with IoT.

Many thanks to Brandon for his insights on the post.

If you want to join the next batch of the Data Science for IoT course, please email me at ajit.jaokar at futuretext.com.