Artificial General Intelligence (AGI) will likely be achieved in less than 50 years, according to latest KDnuggets Poll. The median estimate from all regions was 21-50 years, except in Asia where AGI is expected in 11-20 years. 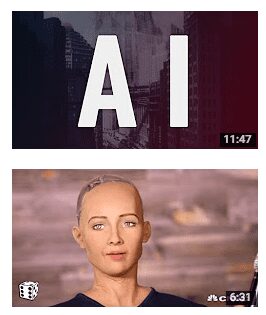 the intelligence of a machine that could successfully perform any intellectual task that a human being can.

AGI promises enormous benefits, such as curing diseases, providing ample leisure time, eliminating car fatalities, and much more. It also poses existential risks for humanity, as Elon Musk and Stephen Hawking warned. Is AGI possible and if so, how close are we to AGI ?

With AlphaGo Zero (and later AlphaZero) achieving superhuman performance in Go, Chess, and other games, and with computers now able to recognize images, understand speech, drive cars, and diagnose radiology images as well as humans or better, AGI seems to be getting closer.

Note: whether technological singularity (when the intelligence will increase exponentially) will come after AGI is a separate question, not addressed in this poll.

When will AGI (Artificial General Intelligence) be reached?

The chart below shows the overall answers and also answers for 3 regions with most respondents. 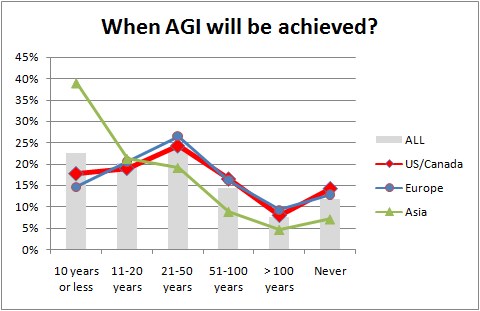 We note that the predictions were quite similar in US/Canada and European regions.

Asian respondents were even more optimistic about AGI and 60% of them think AGI will be achieved in 20 years or less.

Respondents in other regions had similar prediction spread, with median prediction for AGI in 21-50 years range.

The range of 20 to 50 years is in line with predictions from other experts, for example

I doubt anyone reading this tweet will experience #singularity - been Hofstadter fan and can't agree more qz.com/1088714

trylks, the singularity is not coming

If the singularity was possible in our current economy, creating something so similar to a god, which would then be owned by a company, would be the worst to happen to humanity: a return to ancient Egypt where a few (singularity shareholders) would have everything and everyone else would be their slave.

Fortunately, there is no path of low hanging fruits and minimum viable products leading to the singularity, therefore nobody is working in the path to it.

For more text (but probably no more sense), with a ridiculous number of links, here: https://trylks.wordpress.com/2017/12/19/the-technological-singularity-is-beyond-human-capabilities/