This article focuses on design principles of the PCA algorithm for dimensionality reduction and its implementation in Python from scratch.

By Nagesh Singh Chauhan, KDnuggets on May 21, 2020 in Dimensionality Reduction, numpy, PCA, Python

With the availability of high-performance CPUs and GPUs, it is pretty much possible to solve every regression, classification, clustering, and other related problems using machine learning and deep learning models. However, there are still various portions that cause performance bottlenecks while developing such models. A large number of features in the dataset are one of the major factors that affect both the training time as well as the accuracy of machine learning models.

In machine learning, “dimensionality” simply refers to the number of features (i.e. input variables) in your dataset.

While the performance of any machine learning model increases if we add additional features/dimensions, at some point a further insertion leads to performance degradation that is when the number of features is very large commensurate with the number of observations in your dataset, several linear algorithms strive hard to train efficient models. This is called the “Curse of Dimensionality”.

Dimensionality reduction is a set of techniques that studies how to shrivel the size of data while preserving the most important information and further eliminating the curse of dimensionality. It plays an important role in the performance of classification and clustering problems. 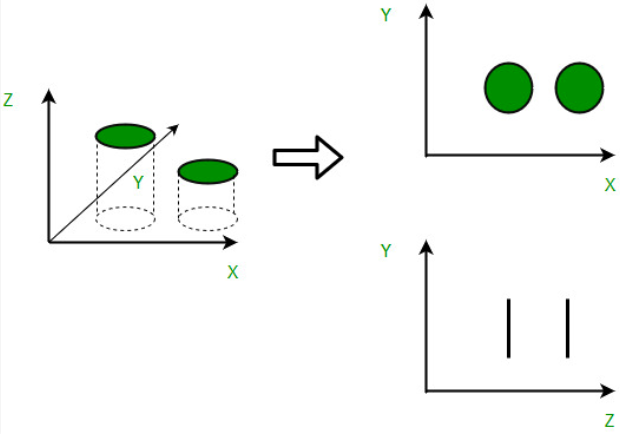 The figure illustrates a 3-D feature space is split into two 1-D feature spaces, and later, if found to be correlated, the number of features can be reduced even further.

The various techniques used for dimensionality reduction include:

This article is focused on the design principals of PCA and its implementation in python.

Principal Component Analysis(PCA) is one of the most popular linear dimension reduction algorithms. It is a projection based method that transforms the data by projecting it onto a set of orthogonal(perpendicular) axes.

In the below figure the data has maximum variance along the red line in two-dimensional space. 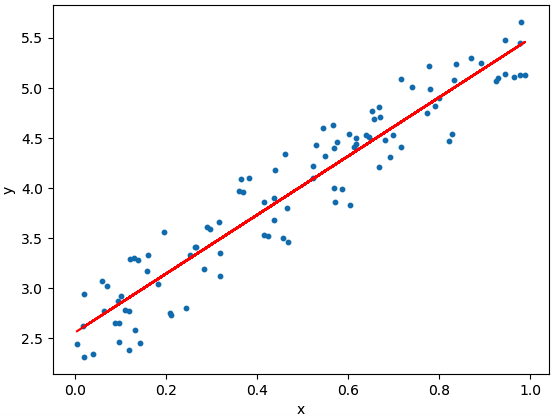 Let’s develop an intuitive understanding of PCA. Suppose, you wish to distinguish between different food items based on their nutritional content. Which variable will be a good choice to differentiate food items? If you choose a variable that varies a lot from one food item to another, you will be able to detach them properly. Your job will be much harder if the chosen variable is almost in the same quantity in food items. What if data doesn’t have a variable that segregates food items properly? We can create an artificial variable through a linear combination of original variables like

This is what essentially PCA does, it finds the best linear combinations of the original variables so that the variance or spread along the new variable is maximum. 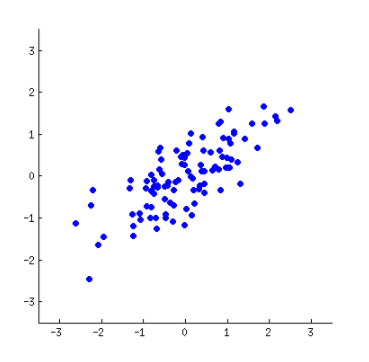 Say the magenta line will be our new dimension.

Once, we get all the principal axes, the dataset is projected onto these axes. The columns in the projected or transformed dataset are called principal components.

The principal components are essentially the linear combinations of the original variables, the weights vector in this combination is actually the eigenvector found which in turn satisfies the principle of least squares.

Matrix Decomposition is a process in which a matrix is reduced to its constituent parts to simplify a range of more complex operations. Eigenvalue Decomposition is the most used matrix decomposition method which involves decomposing a square matrix(n*n) into a set of eigenvectors and eigenvalues.

Eigenvectors are unit vectors, which means that their length or magnitude is equal to 1.0. They are often referred to as right vectors, which simply means a column vector (as opposed to a row vector or a left vector).

Eigenvalues are coefficients applied to eigenvectors that give the vectors their length or magnitude. For example, a negative eigenvalue may reverse the direction of the eigenvector as part of scaling it.

Mathematically, A vector is an eigenvector of a matrix any n*n square matrix A if it satisfies the following equation:

In simpler words, the linear transformation of a vector v by A has the same effect of scaling the vector by factor 𝞴. Note that for m*n non-square matrix A with m ≠ n, A.v an m-D vector but 𝞴.vis an n-D vector, i.e., no eigenvalues and eigenvectors are defined. If you wanna diver deeper into mathematics check this out.

Multiplying these constituent matrices together, or combining the transformations represented by the matrices will result in the original matrix.

A decomposition operation does not result in a compression of the matrix; instead, it breaks it down into constituent parts to make certain operations on the matrix easier to perform. Like other matrix decomposition methods, Eigendecomposition is used as an element to simplify the calculation of other more complex matrix operations.

Singular value decomposition is a method of decomposing a matrix into three other matrices. 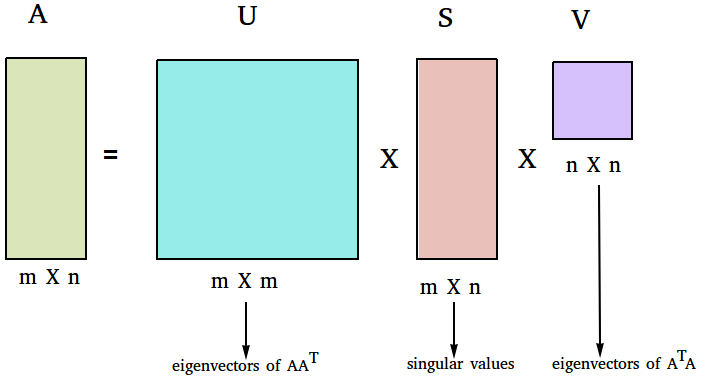 Mathematically Singular value decomposition is given by:

As shown, SVD produces three matrices U, S & V. U and V orthogonal matrices whose columns represent eigenvectors of AAT and ATA respectively. The matrix S is a diagonal matrix and diagonal values are called singular values. Each singular value is the square-root of the corresponding eigenvalue.

How does dimension reduction fit into these mathematical equations?

Well, once you have calculated eigenvalues and eigenvectors choose the important eigenvectors to form a set of principal axes.

All eigenvectors are arranged according to their eigenvalues in descending order. Now, we have to decide how many eigenvectors to retain and for that we need to discuss two methods Total variance explained and Scree Plot for that.

Total Explained variance is used to measure the discrepancy between a model and actual data. It is the part of the model’s total variance that is explained by factors that are present.

Suppose, we have a vector of n eigenvalues(e0,..., en) sorted in descending order. Take the cumulative sum of eigenvalues at every index until the sum is greater than 95% of the total variance. Reject all eigenvalues and eigenvectors after that index.

From the scree plot, we can read off the percentage of the variance in the data explained as we add principal components. 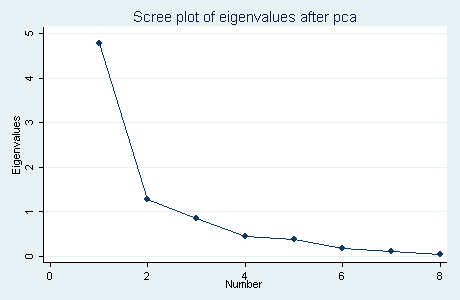 For example in the scree plot shown above the sharp bend(elbow) is at 4. So, the number of principal axes should be 4.

The example below defines a small 3×2 matrix, centers the data in the matrix, calculates the covariance matrix of the centered data, and then the eigenvalue decomposition of the covariance matrix. The eigenvectors and eigenvalues are taken as the principal components and singular values which are finally used to project the original data on the new axes.

With all the effectiveness PCA provides, but if the number of variables is large, it becomes hard to interpret the principal components. PCA is most suitable when variables have a linear relationship among them. Also, PCA is susceptible to big outliers.

PCA is an old method and has been well researched. There are many extensions of basic PCA which address its shortcomings like robust PCA, kernel PCA, incremental PCA. Through this article, we developed a basic and intuitive understanding of PCA. We discussed a few important concepts related to its implementation.

Well, that’s all for this article hope you guys have enjoyed reading it and I’ll be glad if it is of any help. Feel free to share your comments/thoughts/feedback in the comment section.