Foster Provost in memoriam for Tom Fawcett, killed on June 4th in a freak bicycle accident. Tom was a brilliant scholar, a selfless collaborator, a substantial contributor to Data Science for three decades, and a unique individual. 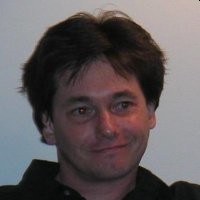 My dear friend Tom Fawcett (1958 - 2020) was killed on June 4th in a freak bicycle accident. Tom was a brilliant scholar, a selfless collaborator, a substantial contributor to Data Science for three decades, and a unique individual.

Tom and I collaborated closely for much of my career. We started working together in 1994, when I joined what's now Verizon (then NYNEX Science and Technology). My initial impression was that Tom was a curmudgeon (yes, even back then), and I had some doubts about what working with him would be like. Very soon I realized that beneath this impression he was a kind, thoughtful, caring guy, as well as a brilliant data scientist. He was my main day-to-day professional partner up until we both left for other jobs in late 1999. That was a magical half decade. Tom was the sort of collaborator where one afternoon we would adjourn our meeting with a set of items for each to do, and when we got together the next day Tom would have done all of his *plus* several more crucial things that had come up in the process. That was the case even if in the intervening evening we had gone out to see some 90s neo-punk or heavy alt rock band, which we liked to do. Because of this, *I* had to double down--I wasn't going to be the slacker on the team. Without any doubt I did substantially better work because I was working with Tom than I would have done on my own.

My favorite "Tom story" is from those days. Tom and I were involved with a project where the higher ups needed to make a decision on how to deal with the increasingly visible poor service the company was providing. Ideally, they would liked to have shown that the problem was to a large extent due to the prior year's high humidity, since everyone knows that telecom equipment suffers in high humidity. In perhaps my favorite professional moment, Tom presented the results of the data analysis (which he had done): "Humidity does not seem to have a significant effect on problems in the network. And oh by the way, it wasn't more humid last year." (I recently asked Tom whether his recollection of that incident concurred with mine, and he said that he liked the way I told it, so yes. :-) Incidentally, we then followed up this analysis with a root-cause analysis. Based on those results we then built a model to predict the impact of individual network rehabilitation actions. The model integrated tens of thousands of locally focused regressions. We were told that our model's predictions were used to direct a billion-dollar rehab campaign. A retrospective evaluation after the rehab showed that our predictions were almost perfect, and we won the company's President's Award. That put a self-satisfied smile on my face. Tom said that the evaluation overestimated how accurate our model really was. :-)

I was lucky and blessed to have gotten to spend so much time with Tom. As he continued his work melding data science and practice at several California-based companies over the next twenty years, we continued to write together. And across 3000 miles, he and I would debate just about any topic, whether it was important or not. I'll miss that the most. Love you Tom.