This tutorial discusses the confusion matrix, and how the precision, recall and accuracy are calculated, and how they relate to evaluating deep learning models.

In computer vision, object detection is the problem of locating one or more objects in an image. Besides the traditional object detection techniques, advanced deep learning models like R-CNN and YOLO can achieve impressive detection over different types of objects. These models accept an image as the input and return the coordinates of the bounding box around each detected object.

This tutorial discusses the confusion matrix, and how the precision, recall and accuracy are calculated. In another tutorial, the mAP will be discussed.

In binary classification each input sample is assigned to one of two classes. Generally these two classes are assigned labels like 1 and 0, or positive and negative. More specifically, the two class labels might be something like malignant or benign (e.g. if the problem is about cancer classification), or success or failure (e.g. if it is about classifying student test scores).

Assume there is a binary classification problem with the classes positive and negative. Here is an example of the labels for seven samples used to train the model. These are called the ground-truth labels of the sample.

Note that the class labels are used to help us humans differentiate between the different classes. The thing that is of high importance to the model is a numeric score. When feeding a single sample to the model, the model does not necessarily return a class label, but rather a score. For instance, when these seven samples are fed to the model, their class scores could be:

Based on the scores, each sample is given a class label. How do we convert these scores into labels? We do this by using a threshold. This threshold is a hyperparameter of the model and can be defined by the user. For example, the threshold could be 0.5–then any sample above or equal to 0.5 is given the positive label. Otherwise, it is negative. Here are the predicted labels for the samples:

To extract more information about model performance the confusion matrix is used. The confusion matrix helps us visualize whether the model is "confused" in discriminating between the two classes. As seen in the next figure, it is a 2×2 matrix. The labels of the two rows and columns are Positive and Negative to reflect the two class labels. In this example the row labels represent the ground-truth labels, while the column labels represent the predicted labels. This could be changed. 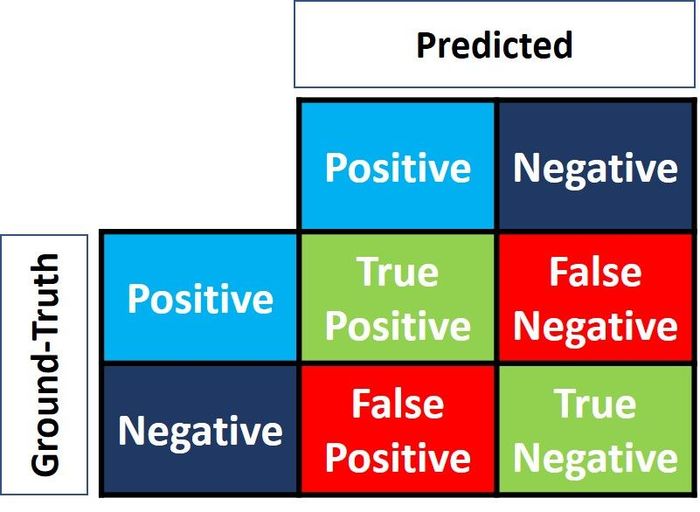 The 4 elements of the matrix (the items in red and green) represent the 4 metrics that count the number of correct and incorrect predictions the model made. Each element is given a label that consists of two words:

In summary, whenever the prediction is wrong, the first word is False. Otherwise, it is True. The goal is to maximize the metrics with the word True (True Positive and True Negative), and minimize the other two metrics (False Positive and False Negative). The four metrics in the confusion matrix are thus:

We can calculate these four metrics for the seven predictions we saw previously. The resulting confusion matrix is given in the next figure. 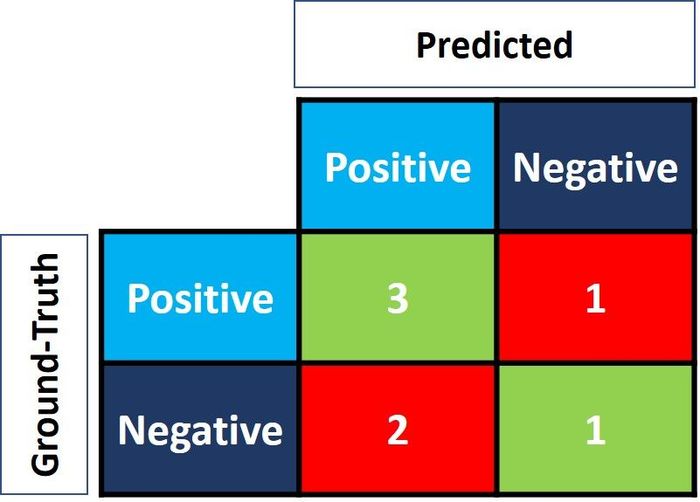 What if we have more than two classes? How do we calculate these four metrics in the confusion matrix for a multi-class classification problem? Simple!

Assume there are 9 samples, where each sample belongs to one of three classes: White, Black, or Red. Here is the ground-truth data for the 9 samples.

When the samples are fed into a model, here are the predicted labels.

For easier comparison, here they are side-by-side.

Before calculating the confusion matrix a target class must be specified. Let's set the Red class as the target. This class is marked as Positive, and all other classes are marked as Negative.

Now there are only two classes again (Positive and Negative). Thus, the confusion matrix can be calculated as in the previous section. Note that this matrix is just for the Red class. 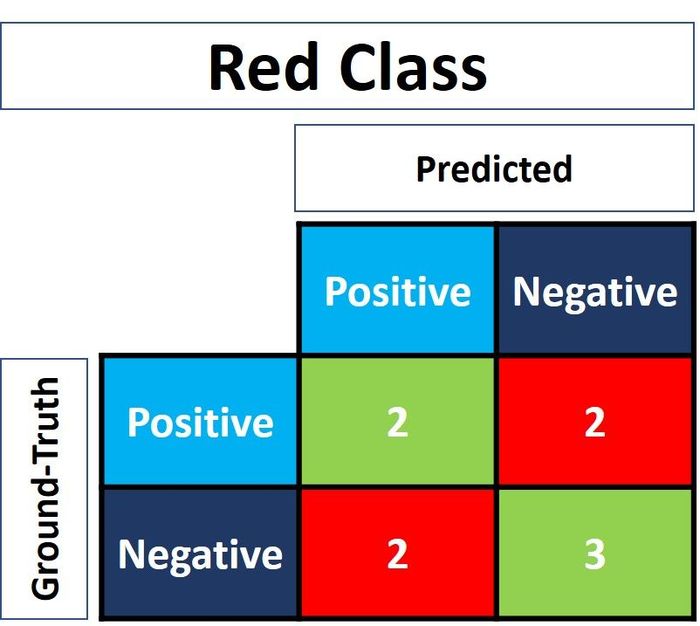 For the White class, replace each of its occurrences as Positive and all other class labels as Negative. After replacement, here are the ground-truth and predicted labels. The next figure shows the confusion matrix for the White class. 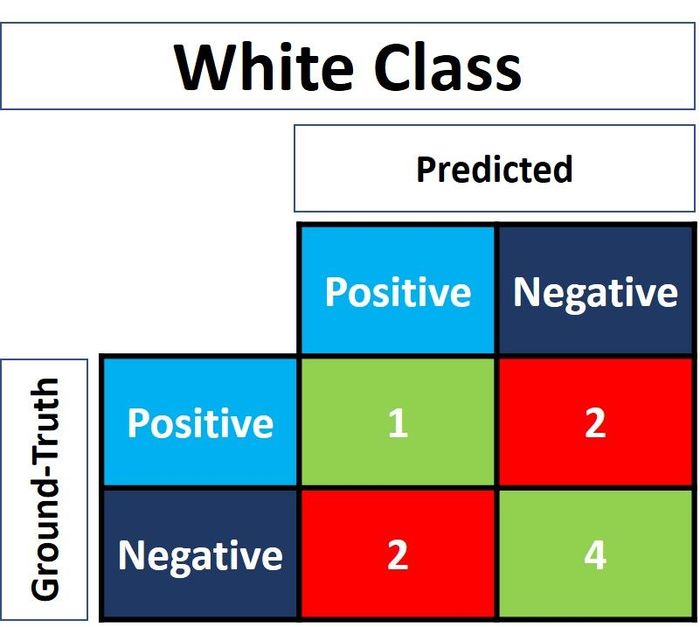 Similarly, here is the confusion matrix for the Black class. 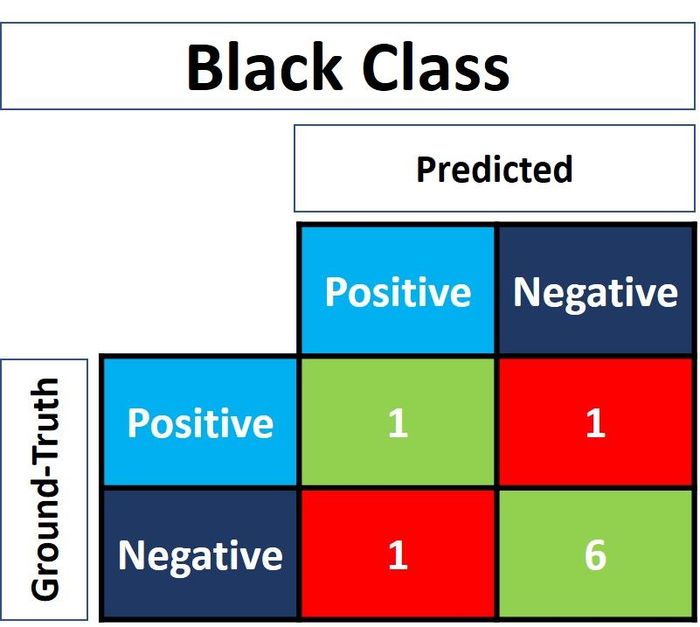 Calculating the Confusion Matrix with Scikit-Learn

The popular Scikit-learn library in Python has a module called metrics that can be used to calculate the metrics in the confusion matrix.

For binary-class problems the confusion_matrix() function is used. Among its accepted parameters, we use these two:

The following code calculates the confusion matrix for the binary classification example we discussed previously.

Note that the order of the metrics differ from that discussed previously. For example, the True Positive metric is at the bottom-right corner while True Negative is at the top-left corner. To fix that, we can flip the matrix.

To calculate the confusion matrix for a multi-class classification problem the multilabel_confusion_matrix() function is used, as shown below. In addition to the y_true and y_pred parameters, a third parameter named labels accepts a list of the class labels.

In the rest of this tutorial we'll focus on just two classes. The next section discusses three key metrics that are calculated based on the confusion matrix.

The confusion matrix offers four different and individual metrics, as we've already seen. Based on these four metrics, other metrics can be calculated which offer more information about how the model behaves:

The next subsections discuss each of these three metrics.

Accuracy is a metric that generally describes how the model performs across all classes. It is useful when all classes are of equal importance. It is calculated as the ratio between the number of correct predictions to the total number of predictions.

Here is how to calculate the accuracy using Scikit-learn, based on the confusion matrix previously calculated. The variable acc holds the result of dividing the sum of True Positives and True Negatives over the sum of all values in the matrix. The result is 0.5714, which means the model is 57.14% accurate in making a correct prediction.

The sklearn.metrics module has a function called accuracy_score() that can also calculate the accuracy. It accepts the ground-truth and predicted labels as arguments.

Note that the accuracy may be deceptive. One case is when the data is imbalanced. Assume there are a total of 600 samples, where 550 belong to the Positive class and just 50 to the Negative class. Since most of the samples belong to one class, the accuracy for that class will be higher than for the other.

If the model made a total of 530/550 correct predictions for the Positive class, compared to just 5/50 for the Negative class, then the total accuracy is (530 + 5) / 600 = 0.8917. This means the model is 89.17% accurate. With that in mind, you might think that for any sample (regardless of its class) the model is likely to make a correct prediction 89.17% of the time. This is not valid, especially when you consider the Negative class for which the model performed badly.

Based on the previous discussion, here is a definition of precision:

The precision reflects how reliable the model is in classifying samples as Positive. 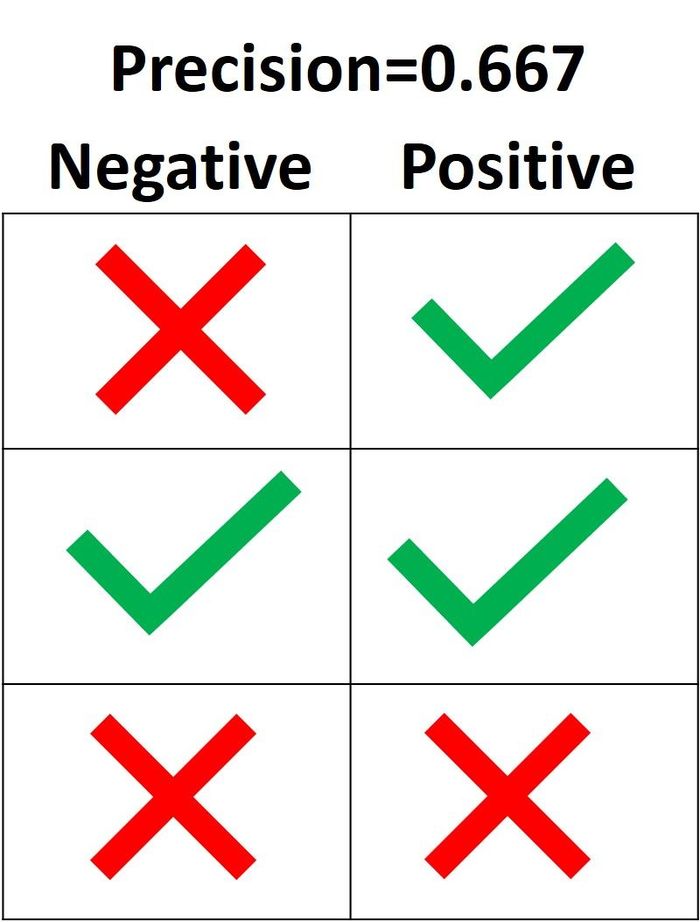 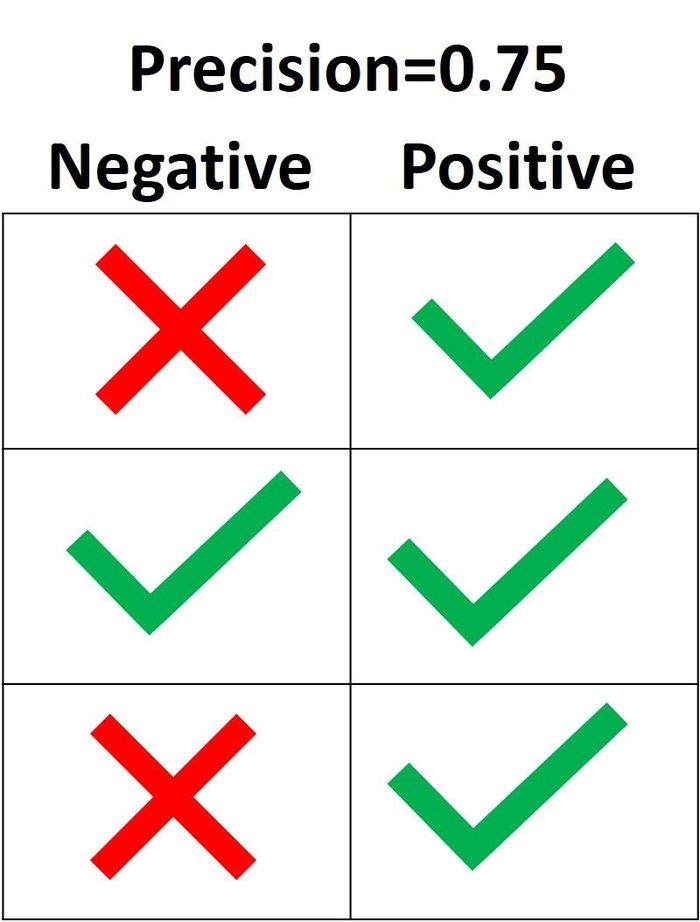 The only way to get 100% precision is to classify all the Positive samples as Positive, in addition to not misclassifying a Negative sample as Positive. 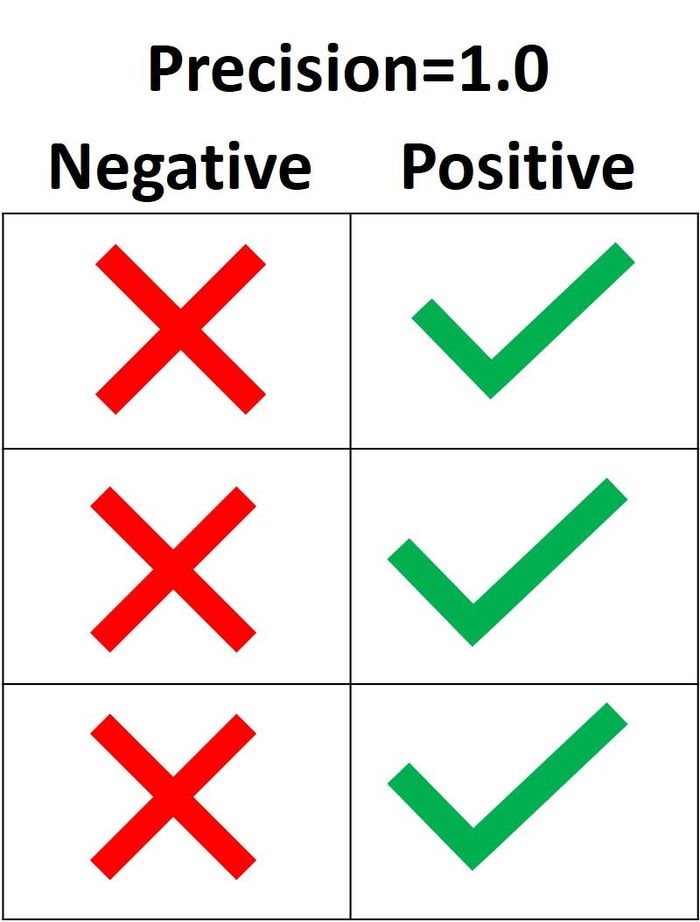 In Scikit-learn, the sklearn.metrics module has a function named precision_score() which accepts the ground-truth and predicted labels and returns the precision. The pos_label parameter accepts the label of the Positive class. It defaults to 1. 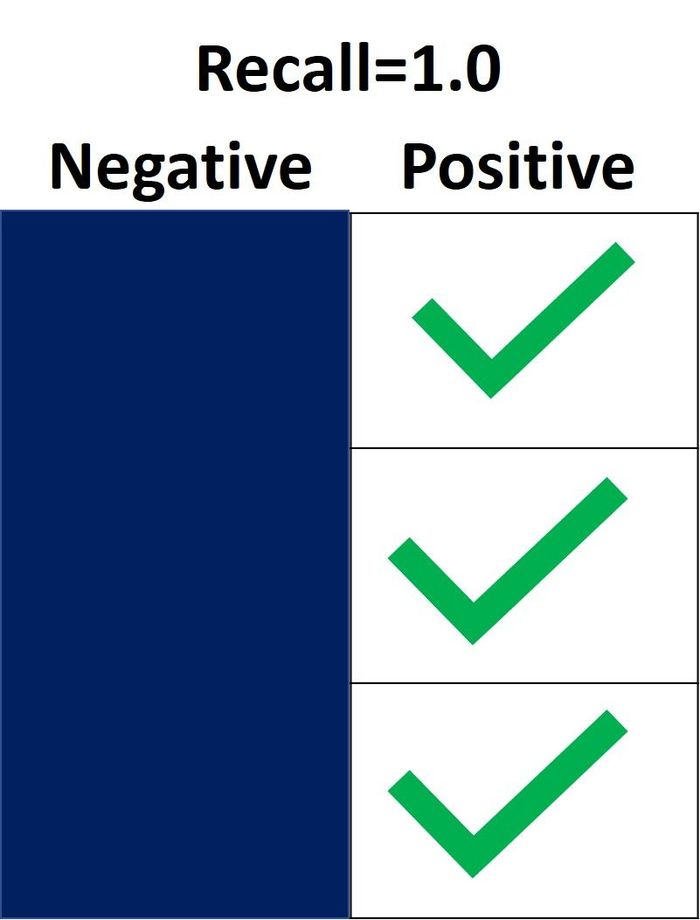 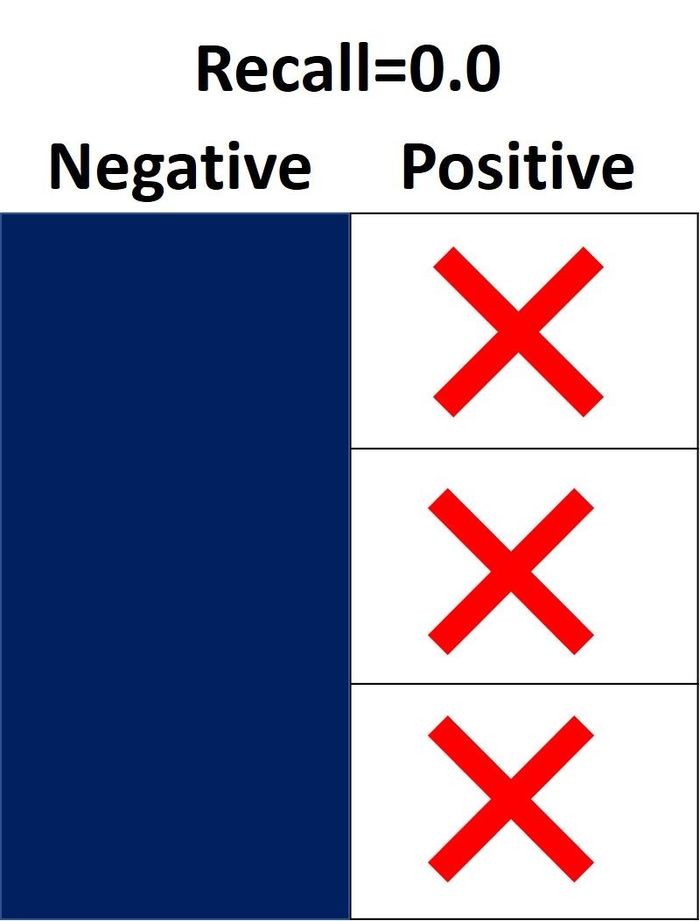 After defining both the precision and the recall, let's have a quick recap:

Here are some questions to test your understanding:

Now say you're given a mammography image, and you are asked to detect whether there is cancer or not. Which metric do you use? Because it is sensitive to incorrectly identifying an image as cancerous, we must be sure when classifying an image as Positive (i.e. has cancer). Thus, precision is the preferred metric.

Based on these 4 metrics we dove into a discussion of accuracy, precision, and recall. Each metric is defined based on several examples. The sklearn.metrics module is used to calculate each of them.