Why Azure ML is the Next Big Thing for Machine Learning?

With advanced capabilities, free access, strong support for R, cloud hosting benefits, drag-and-drop development and many more features, Azure ML is ready to take the consumerization of ML to the next level.

After the success of its Hadoop-based Azure HDInsight and PowerBI for Office 365, Microsoft took yet another step towards market leadership in Big Data through the public preview release of Azure Machine Learning (also known as "Azure ML"). Taking the predictive analytics to public cloud seems like the next logical step towards large-scale consumerization of Machine Learning. Azure ML does just that, while making it significantly easier for the developers. The service runs on Azure public cloud, which means that users need not buy any hardware or software; and also, need not worry about deployment and maintenance.

Through an integrated development environment called ML Studio, people without data science background can also build data models through drag-and-drop gestures and simple data flow diagrams. This not only minimizes coding, but also saves a lot of time through ML Studio's library of sample experiments. On the other hand, seasoned data scientists will be glad to notice how strongly Azure ML supports R. You can just drop existing R code directly into Azure ML, or develop your own code using more than 350 R packages supported by ML Studio.

Azure ML is built on top of the machine learning capabilities of several Microsoft products and services. It shares many of the real-time predictive analytics of the new personal assistant in Windows Phone called Cortana. Azure ML also uses proven solutions from Xbox and Bing. Outshining Nate Silver's lauded FiveThirtyEight blog, Bing Predicts recently astonished many by correctly forecasting the results of more than 95% of the US mid-term elections. Thus, it might be worth checking out Azure ML to see what its powerful cloud-based predictive analytics can do for you.

During the Strata+Hadoop World Conference in New York a month ago, Azure ML was being compared to IBM's Watson. In his keynote, Joseph Sirosh, Microsoft CVP of Machine Learning, announced new machine learning capabilities for Azure Marketplace, which has evolved significantly over the last few years (since its launch in October 2010). Azure Marketplace hosts various exciting APIs that use ML, including the Bing Speech Recognition Control, Microsoft Translator, Bing Synonyms API and Bing Search API. As of today, Azure Marketplace has 25+ machine learning APIs. 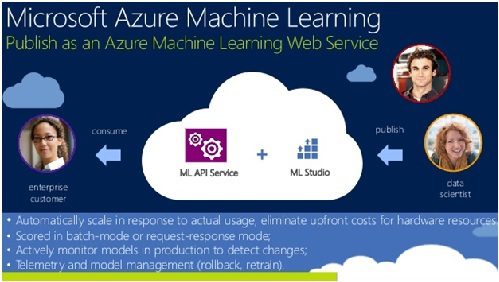 In the efforts to boost the adoption of the still new Azure ML service, Microsoft has taken several steps to make it easier for people to try it. Recently, Microsoft executives at the PASS Summit in Seattle, announced a free tier of access to Azure ML (i.e. now you can try Azure ML without providing any credit card information). This has encouraged DBAs, developers, BI professionals and amateur data scientists to try Azure ML for building models to incorporate into applications. Besides, Microsoft also launched the Microsoft Azure for Research Award Program offering research grants to both seasoned researchers and students to try Azure ML.

Here is a short video on how Azure ML solves the common challenges in developing and deploying predictive analytics projects:

If you are interested in trying Azure ML, there are a lot of resources on Machine Learning Center to help you get started.

Microsoft Azure Machine Learning as a Service has gone a long way since its launch in June 2014 and it sure looks like Microsoft is investing on its long term success.

KDnuggets Home » News » 2014 » Nov » Software » Why Azure ML is the Next Big Thing for Machine Learning?