Which Data Profession Has The Highest Job Satisfaction?

KDnuggets poll compares Machine Learning Engineer, Researcher, Data Scientist and other professions and identifies one with the highest job satisfaction. Job satisfaction usually starts high, but drops significantly after 4 years on the job.

comments
Data Scientist is probably no longer the "sexiest" profession, displaced by its younger and more exciting cousin, Machine Learning Engineer - those seems to be the results of a recent KDnuggets poll.

However, a recent post Why so many data scientists are leaving their jobs by Jonny Brooks seems to have touched a nerve and brought a lot of dissatisfaction to the surface.

The results, based on 635 voters, are very interesting and suggest that while Data Scientist may no longer be the sexiest profession, it is still very satisfying. 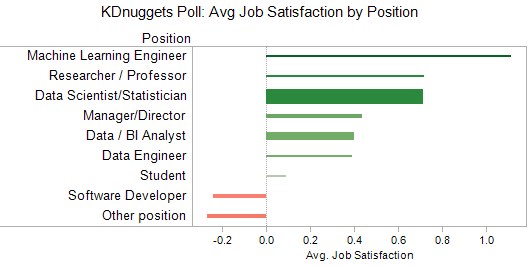 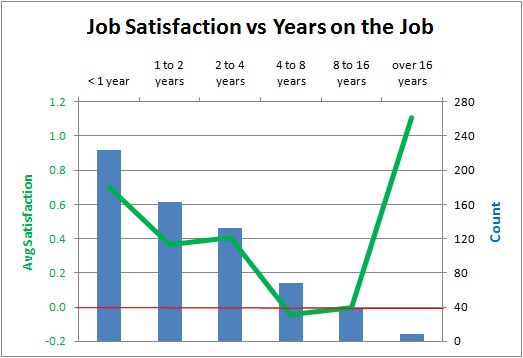 We also found that job satisfaction changes differently for different positions - see Fig. 3, which shows results for the 4 most common positions (at least 40 respondents). 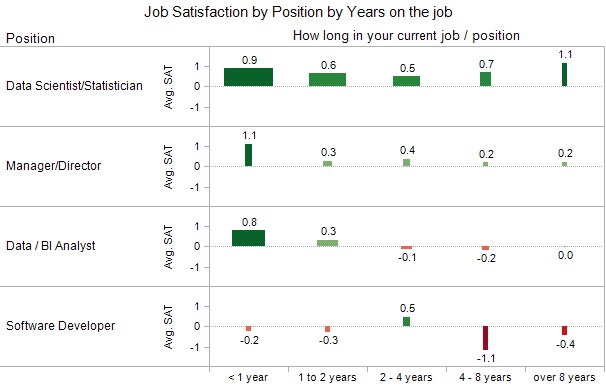 We note that "Data Scientist/Statistician" job satisfaction drops relatively slowly with time, unlike Data / BI Analysts who become unhappy after 2 years on the job, and Software developers who are mostly unhappy.

Next table shows details by position.