This article covers ensemble learning methods, and exactly what you need to know in order to understand and implement them.

Ensemble learning techniques have been proven to yield better performance on machine learning problems. We can use these techniques for regression as well as classification problems.

The final prediction from these ensembling techniques is obtained by combining results from several base models. Averaging, voting and stacking are some of the ways the results are combined to obtain a final prediction.

In this article, we will explore how ensemble learning can be used to come up with optimal machine learning models.

What is ensemble learning?

Ensemble learning is a combination of several machine learning models in one problem. These models are known as weak learners. The intuition is that when you combine several weak learners, they can become strong learners.

Each weak learner is fitted on the training set and provides predictions obtained. The final prediction result is computed by combining the results from all the weak learners.

Let’s take an example where you have three classifiers with the following predictions:

The final prediction here would be class B since it has the most votes.

Let’s take an example of three regression models that predict the price of a commodity as follows:

In weighted averaging, the base model with higher predictive power is more important. In the price prediction example, each of the regressors would be assigned a weight.

The sum of the weights would equal one. Let’s say that the regressors are given weights of 0.35, 0.45, and 0.2 respectively. The final model prediction can be computed as follows:

Above are simple techniques, now let’s take a look at advanced techniques for ensemble learning.

Stacking is the process of combining various estimators in order to reduce their biases. Predictions from each estimator are stacked together and used as input to a final estimator (usually called a meta-model) that computes the final prediction. Training of the final estimator happens via cross-validation.

Stacking can be done for both regression and classification problems. 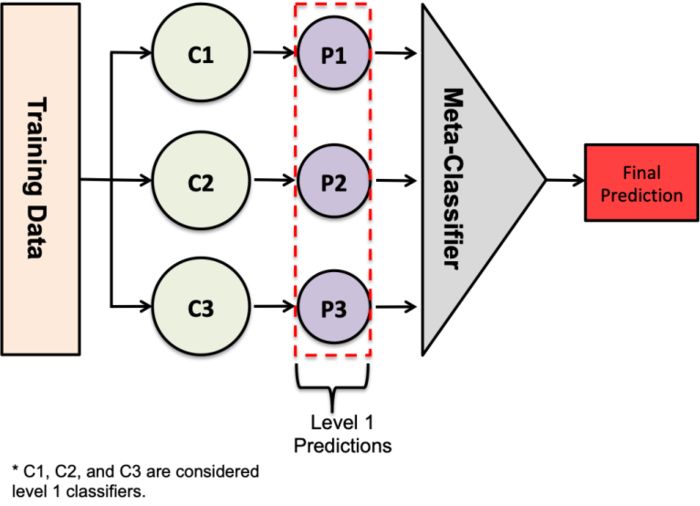 Stacking can be considered to happen in the following steps:

You can think of blending as a type of stacking, where the meta-model is trained on predictions made by the base model on the hold-out validation set.

You can consider the blending process to be:

The concept of blending was made popular by the Netflix Prize competition. The winning team used a blended solution to achieve a 10-fold performance improvement on Netflix’s movie recommendation algorithm.

According to this Kaggle ensembling guide:

“Blending is a word introduced by the Netflix winners. It’s very close to stacked generalization, but a bit simpler and less risk of an information leak. Some researchers use “stacked ensembling” and “blending” interchangeably.

Blending is simpler than stacking and prevents leakage of information in the model. The generalizers and the stackers use different datasets.  However, blending uses less data and may lead to overfitting.

Cross-validation is more solid on stacking than blending. It’s calculated over more folds, compared to using a small hold-out dataset in blending.

Boosting is a machine learning ensemble technique that reduces bias and variance by converting weak learners into strong learners. The weak learners are applied to the dataset in a sequential manner. The first step is building an initial model and fitting it into the training set.

A second model that tries to fix the errors generated by the first model is then fitted. Here’s what the entire process looks like:

With that introduction out of the way, let’s talk about libraries that you can use for ensembling. Broadly speaking, there are two categories:

Bagging algorithms are based on the bagging technique described above. Let’s take a look at a couple of them.

Scikit-learn lets us implement a `BaggingClassifier` and a `BaggingRegressor`. The bagging meta-estimator fits each base model on random subsets of the original dataset. It then computes the final prediction by aggregating individual base model predictions. Aggregation is done by voting or averaging. The method reduces the variance of estimators by introducing randomization in their construction process.

There are several flavors of bagging:

Let’s take a look at how you can create a bagging estimator using Scikit-learn.

This takes a few steps:

Next, you can fit this classifier on the training set and score it.

The process will be the same for regression problems, the only difference being that you will work with regression estimators.

A Random Forest® is an ensemble of random decision trees. Each decision tree is created from a different sample of the dataset. The samples are drawn with replacement. Every tree produces its own prediction.

In regression, these results are averaged to obtain the final result.

In classification, the final result can be obtained as the class with the most votes.

The averaging and voting improves the accuracy of the model by preventing overfitting.

In Scikit-learn a forest of randomized trees can be implemented via `RandomForestClassifier` and the `ExtraTreesClassifier`. Similar estimators are available for regression problems.

These algorithms are based on the boosting framework described earlier. Let’s look at a few of them.

AdaBoost works by fitting a sequence of weak learners. It gives incorrect predictions more weight in subsequent iterations, and less weight to correct predictions. This forces the algorithm to focus on observations that are harder to predict. The final prediction comes from weighing the majority vote or sum.

We use the `AdaBoostClassifier`. `n_estimators` dictates the number of weak learners in the ensemble. The contribution of each weak learner to the final combination is controlled by the `learning_rate`.

Gradient tree boosting also combines a set of weak learners to form a strong learner. There are three main items to note, as far as gradient boosting trees are concerned:

You can use Scikit-learn to build a model based on gradient tree boosting.

eXtreme Gradient Boosting, popularly known as XGoost, is a top gradient boosting framework. It’s based on an ensemble of weak decision trees. It can do parallel computations on a single computer.

The algorithm uses regression trees for the base learner. It also has cross-validation built-in. Developers love it for its accuracy, efficiency, and feasibility.

LightGBM can be used for both regression and classification problems by setting the appropriate objective.

Here’s how you can apply LightGBM to a binary classification problem.

CatBoost is a depth-wise gradient boosting library developed by Yandex. It grows a balanced tree using oblivion decision trees. As you can see in the image below, the same features are used when making left and right splits at each level.

Here’s how you can apply CatBoost to a classification problem.

Libraries that help you do stacking on base models

First, you need to set up the base estimator that you want to use.

Next, instantiate the stacking classifier. Its parameters include:

After that, you can fit the data to the training set and score it on the test set.

Scikit-learn also lets you implement a voting estimator. It uses the majority vote or the average of the probabilities from the base estimators to make the final prediction.

This can be implemented using the  `VotingClassifier` for classification problems and the `VotingRegressor` for regression problems. Just like stacking, you will first have to define a set of base estimators.

Let’s look at how you can implement it for classification problems. The `VotingClassifier` lets you select the voting type:

The voting regressor uses several estimators and returns the final result as the average of predicted values.

You can also perform stacking using Mlxtend’s `StackingCVClassifier`. The first step is to define a list of base estimators, and then pass the estimators to the classifier.

You also have to define the final model that will be used to aggregate the predictions. In this case, it’s the logistic regression model.

When to use ensemble learning

You can employ ensemble learning techniques when you want to improve the performance of machine learning models. For example to increase the accuracy of classification models or to reduce the mean absolute error for regression models. Ensembling also results in a more stable model.

When your model is overfitting on the training set, you can also employ ensembling learning methods to create a more complex model. The models in the ensemble would then improve performance on the dataset by combining their predictions.

Ensemble learning works best when the base models are not correlated. For instance, you can train different models such as linear models, decision trees, and neural nets on different datasets or features. The less correlated the base models, the better.

The idea behind using uncorrelated models is that each may be solving a weakness of the other. They also have different strengths which, when combined, will result in a well-performing estimator. For example, creating an ensemble of just tree-based models may not be as effective as combining tree-type algorithms with other types of algorithms.

In this article, we explored how to use ensemble learning to improve the performance of machine learning models. We’ve also gone through various tools and techniques that you can use for ensembling. Your machine learning repertoire has hopefully grown.