This post discusses the SwAV (Swapping Assignments between multiple Views of the same image) method from the paper “Unsupervised Learning of Visual Features by Contrasting Cluster Assignments” by M. Caron et al.

In this post we discuss SwAV (Swapping Assignments between multiple Views of the same image) method from the paper “Unsupervised Learning of Visual Features by Contrasting Cluster Assignments” by M. Caron et al.

For those interested in coding, several code repositories about SwAV algorithm are on GitHub; if in doubt, take a look at the repo mentioned in the paper.

Supervised learning works with labeled training data; for example, in supervised image classification algorithms a cat photo needs to be annotated and labeled as “cat”. Self-supervised learning aims at obtaining features without using manual annotations. We will consider, in paticular, visual features.

There are two main classes of self-supervised learning methods for visual representation learning:

Contrastive methods require computing all the pairwise comparisons on a large dataset; this is not practical. Typical clustering-based methods require to process entire datasets to determine codes, and this is expensive. A cheaper method would be better: online learning methods allow to train a system feeding a single data (or a mini-batch) instance at a time (no need to provide or process the whole input dataset at the start). The model can learn about new data on the fly and it keeps learning as new data comes in.

The SwAV method is a clustering-based online method whose goal is to learn visual features in an online fashion without supervision.

Each image xn (we suppose there are N original images in total) is transformed into an augmented view xnt where t is a transformation like cropping, rotation, reducing image size, color change. The authors use a multi-crop stage where two standard resolution crops are used and V additional low resolution crops that cover only small parts of the image are sampled (V + 2 images in total, low resolution images ensures only a small increase in the compute cost).

The augmented view is mapped to a vector representation fθ (xnt) and this feature is then normalized into znt. In practice, fθ is a sort of image encoder implemented by a convolutional neural network (ResNet50 for example) followed by a projection head that consists of a two layered MLP with ReLU activations.

After this normalization, a code qnt is computed mapping znt to a set of K trainable normal vectors {c1 , . . . , cK}, called prototypes, that may be thought as the “clusters” in which the dataset should be partitioned (details about how to compute codes and update prototypes online are in the next paragraph). The number of prototypes K is given and not inferred. The authors set a default test value of 3000 prototypes for classification on ImageNet dataset. In neural networks implementation, a prototype vector is just the weights of a dense layer (with linear activation).

A little swapping trick comes in the end. Consider two different features zt and zs from two different augmentations of the same image and compute their codes qt and qs by matching these features to a set of K prototypes {c1 , . . . , cK}. Then consider the following loss:

The intuition is that if the two features zt and zs capture the same information (in essence, they are features deriving from the same image), then it should be possible to predict a given feature’s code from the other feature. The network and prototypes will be updated following this loss function. 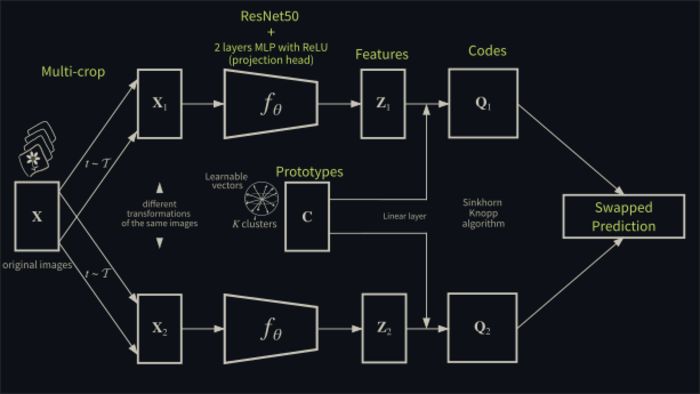 The loss function has two terms. Each term represents the cross entropy loss between the code

obtained by taking the softmax of the dot products of zi and all prototypes, that is

(k ranges over all prototypes) where for each fixed k

The parameter τ is called temperature. The logarithm in the cross-entropy expression is applied element-wise. If we call C the matrix whose columns are the prototype vectors and if we use the fact that natural logarithm is the inverse function of exp, we can express the total loss for every image and for every pair of transformations varying in their respective domains:

So we have to map B samples to K prototypes: let Q be the matrix representing this mapping. There is a trivial solution that must be discarded: assigning all samples to just one cluster! To solve this issue we introduce an equipartition constraint. Intuitively, we want that all prototypes are selected the same amounts of time. So, as a constraint, we restrict our attention only to those matrices whose projections onto their rows and columns — respectively — are probability distributions that split the data uniformly, which is captured by

where 1K and 1B are vectors of all ones of the appropriate dimensions. Therefore, we restrict our attention to the set

These constraints enforce that on average each prototype is selected at least B/K times in the batch.

We introduce a cost matrix, that is –C⊤Z. Each entry of this matrix is the dot product between a sample and a prototype and roughly represents the cost we are going to pay when we assign a sample to a prototype.

We want to solve assignment problem under equipartition constraint and following a cost matrix.

Recall that, if M is a given D ⨉ D cost matrix, the cost of mapping r to c (two probability vectors) using a transport matrix (or joint probability) P can be quantified as ⟨P , M⟩, where ⟨.⟩ is the Frobenius product. If

where H is the entropy function

is a parameter. In essence,

H(Q) is a regularization term. A solution to this regularized transport problem is in the form

. The vectors u and v are computed with a small number of matrix multiplications using the iterative Sinkhorn-Knopp algorithm (see next paragraph for pseudocode).

The pseudocode for the Sinkhorn-Knopp algorithm is the following.

Interesting video on the SwAV method.

Bio: Antonio Ferraioli is an AI aficionado living in southern Italy. Admin of "m0nads", a blog about AI (and its subfields) and Data Science.