A short overview of Natural Language Processing tools and utilities developed by Prof. Noah Smith, CMU and his team to analyze Twitter data.


By Anmol Rajpurohit
Twitter data has recently been one of the most favorite dataset for Natural Language Processing (NLP) researchers. Besides its magnanimous size, Twitter data has other unique qualities as well – it comprises of real-life conversations, uniform length (140 characters), rich variety, and real-time data stream. Advanced analytics on Twitter data needs one to go beyond the words and parse sentences into syntactic representations to develop a better contextual understanding of the tweet content. This can now be done conveniently through the tools developed by Prof. Noah Smith and his team at Carnegie Mellon University.

Part-of-Speech Tagging: A fast and robust Java-based tokenizer and part-of-speech tagger for tweets that breaks down the tweet into a sequence of tokens (which roughly corresponds to “words”) and identifies the part-of-speech (such as interjection, proper noun, preposition, subordinate conjunction, etc.) that the token belongs to. Importantly, the tool also identifies misspellings and corrects them before deciding which part-of-speech the token would belong to. 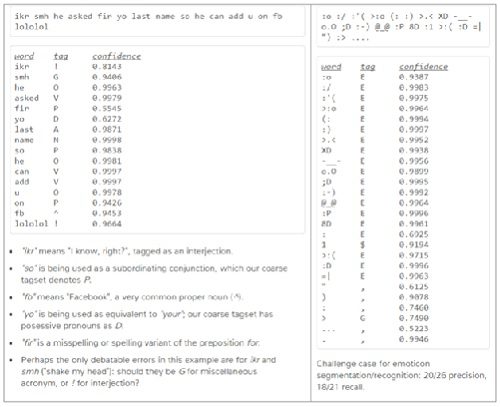 Parser (along with pre-trained models and annotated data) is available here on SourceForge.

If interested, you can check out the HTML version of all the clusters.

For more details, refer to the following recent publications: