The Analytics of Emotion and Depression

Analytics can be used to provide a boost to the cure of depression. How analytics is being adopted by companies like Microsoft, Facebook to handle and detect vulnerable targets of depression.

We talk about heart related ailments, diabetes, dengue, chikunguniya and swine flu that have constantly thronged our imagination. We receive e-mails, sms texts and WhatsApp messages from multiple sources highlighting the care required to cure these ailments that are now part of Indian society as a whole. According to WHO, India is a house of close to 48 Crore, or 480 Million (Editor: Crore is 10 Million) individuals who are likely to suffer from depression at some point in their lives. Imagine, out of 1.35 Billion, 480 Million are encountering mind related troubles. We have failed to address depression. As a society living in denial, some have gone to an extent to term the WHO figures as an aberration in interpretation. While the WHO figures may be exaggerated, the average age of depression in India is dropping too quick. Some experts are speculating this age to drop to 30 years if timely measures are not taken. As per NIMHANS Bangalore, this age was 31 years in 2009.

Feeling low from time to time is quite normal. When emotions like hopelessness and despair take control of the mind, people start feeling restless. This feeling is very different from normal sadness and hinders all the routine activities, eating habits, sleeping cycles and so on. The symptoms are different for men, women, teens and older adults. Men are less likely to accept the feeling of guilt and tend to complain more about fatigue and irritability. Women on the other hand experience symptoms like guilt, over eating and weight gain. Teens are much more agitated while the older adults tend to complain more about body pain. As per a reply in Lok Sabha by Ministry of Health and Family Welfare in the year 2015, there are only 3800 psychiatrists in India. Close to 3 psychiatrists per million people. Spending on mental health is only 0.06 percent of the total health budget. The government has started doing work in the direction of increasing the support required for mental health. Adding more manpower to handle this silent problem should not be the only step forward. We need to take concrete measures in using other measures to handle depression.

We live in a country which is accumulating and leveraging huge amount of data. Big Data, Hadoop and many more platforms are accumulating great benefits for various domains like Banking, Finance, Services and the Insurance. Health related companies are also using the data power to better their systems. Brands are analysing the data to reach to each and every individual on the internet using analytics. Facebook, Twitter and Instagram have now become an integral part of our lives. According to statista.com, India has close to 340 million smart phone users. This number is increasing every day. Quoting a report by IAMAI & KPMG titled ‘India On The Go – Mobile internet Vision 2017,’ India will have 500 million internet users, though a majority of these 500 million users will be mobile phone users. Companies utilise tools like flurry and google analytics to observe the time invested by the users on the content served. The power of internet and capabilities of data can be combined to take small but valuable steps to handle depression.

An Indian start-up named “Social Cops” is using the power of data to track farmer suicides in Karnataka. A New Zealand based start-up named Code Blue has come up with a smartphone app to help the depressed and the ones who are contemplating suicide. Israel based start-up named Brainsway has developed a wearable helmet that cures depression. Malaysian Mental Health Association in coordination with IBM is using big data analytics to gauge public perceptions of mental health in Malaysia. Centerstone Research Institute, a US based non-profit organisation is working on using the power of big data to produce a knowledge network. They collect prescription records, service records related to millions of patients. Reading the prescription through text analytics to do further research will help identify not only depression related cases but also other health related problems. Working on social media strategies to enhance public awareness on mental health seems to be the need of the hour. Social media approach is the one which would break the stigmas and raise awareness levels by connecting the ones in need with the reputed source. Technology and the know how about analytics is at our disposal and extracting actionable insights from huge datasets is the need of every analytics related problem.

Research on Instagram posts by a team from University of Vermont and Harvard University is being conducted to develop an Artificial Intelligence tool that would identify the mood of the individual sharing a post. The joint research paper published by these two universities has been written by Andrew Reece and Christopher Danforth. They collected data using the Amazon Mechanical Turk and prepared separate surveys for depressed and health individuals. 166 individuals were asked to submit their Instagram username and history. Common image analysis properties like HSV (Hue, Saturation and Value) were used to calculate pixel level averages. A variety of information was extracted from the data collected. Data related to user activity was based on the total posts made by the user per day. Community reaction was checked by tracking the number of likes and comments received on the post. Face detection was used to find the number of faces in the photographs to understand the participant’s social interaction.

Instagram filter usage was analysed amongst the depressed and healthy participants. Bars in the following graph taken from the research paper indicates the difference between observed and expected usage frequencies, based on a Chi-squared analysis of independence. Blue bars indicate disproportionate use of a filter by depressed compared to healthy participants, orange bars indicate the reverse. 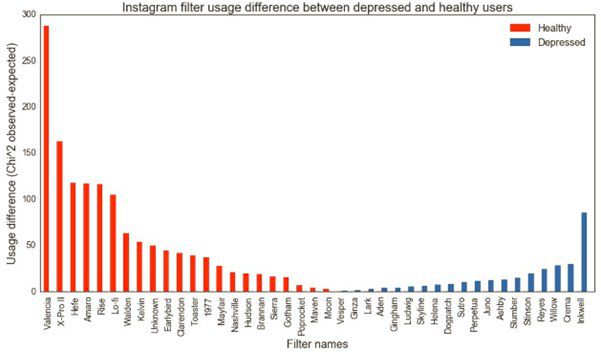 According to a report published by International Business Times on 1st March 2017, Facebook is now working on Artificial Intelligence based algorithm to identify high risk individuals after many users attempted suicide using its livestream feature. University of Pennsylvania and Massachusetts General Hospital are working rapidly towards identifying genetic causes of depression using Big Data. Research has shown that depression is generally a consequence of a big event. Be it childbirth or marriage. Post-natal depression is fast growing among Indians. When we visit an online shopping store, we surf the content and we close the tab. Next day when we open our Facebook account, we see a thumbnail highlighting the content we surfed yesterday. This highlights that we are being tracked. When our every activity is being recorded by website or application creators, it is also being tracked how often do we post on social media. What kind of posts are we sharing and how are we connected to our society.

In an interview with GNIP, Dr. Munmun De Choudhury of Microsoft Research also shared how Microsoft too is studying the social data to understand mental health and single out the signals of depression. The big question still remains that can we design these interventions for people whom we are going to term as vulnerable to a certain mental illness. If the vulnerability is too high what should be our responsibility as a community. There has to be a structured approach for the same. Identification and applying appropriate counseling, abiding by the privacy and ethical norms will make a positive impact on the individual. We as a community should accept “Depression” and move towards solving it rather than hiding it. Through analytics, like done for other fields, we can deliver tools that identify onset of depression in people.

Bio: Varunn Kaushik is a Senior Business Consultant with Kie Square Management Consulting. He has more than 6 Years of work experience in Business Analytics.