Resampling Imbalanced Data and Its Limits

Can resampling tackle the problem of too few fraudulent transactions in credit card fraud detection?

Car parking ticket machines used to only accept coins. A self-service vegetable stand used to only accept cash. And not such a long time ago I could buy a bus ticket from the bus driver! These days, however, you can (and you’re often encouraged to) pay for these and many other products and services by credit card. This leads to more and more transactions and also to types of transactions that didn’t exist before. Some time back, a credit card transaction for a vegetable stand would have looked suspicious!

With the increasing variety and volume of credit card usage, fraud is evolving too [1]. This is a huge challenge! For automatic fraud detection and prevention, a number of supervised and unsupervised fraud detection models have been suggested. The unsupervised methods, such as a neural autoencoder, are anomaly detection models and don’t require labeled data. The supervised methods, such as a decision tree or a logistic regression model, require labeled data, which are often not available. Imagine someone manually recognizing and labeling the transactions as “fraudulent” or “legitimate”! Another problem is that the fraudulent transactions are very few compared to the large amounts of legitimate transactions. This imbalance of the target classes decreases the performance of the decision tree algorithm and of other classification algorithms [2].

In this article, we will work with labeled, highly imbalanced transactions data: For each fraudulent transaction we have 579 legitimate transactions. We’ll check if we can improve the performance of a decision tree model by resampling; that is, by artificially creating more data about fraudulent transactions. Along the way, we’ll explain three different resampling methods and evaluate their effects on the fraud prevention application. At the end, we’ll provide a link to a KNIME workflow - an example implementation of the different resampling methods.

The workflow in Figure 1 shows the steps for accessing, preprocessing, resampling, and modeling the transactions data. Inside the yellow box, we access the transactions data, encode the target column from 0/1 to legitimate/fraudulent, and partition the data into training and test sets using 80/20 split and stratified sampling on the target column. Inside the orange boxes, we build four different versions of a decision tree model for fraud detection: a baseline model trained on the original training data plus three models trained on 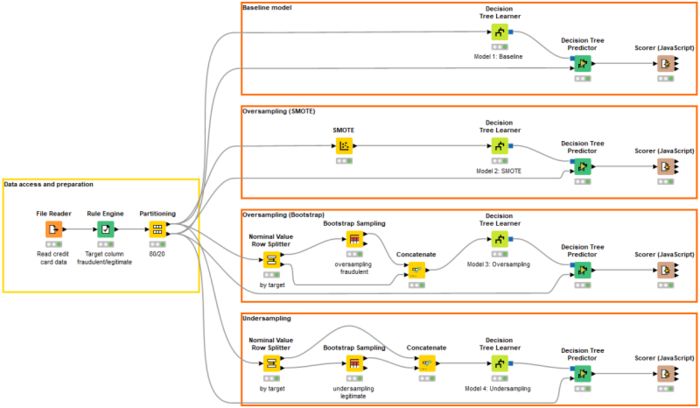 Figure 1. A workflow that accesses and preprocesses transactions data and implements four different decision tree models for fraud detection: one trained on the original data and three models trained on resampled data.

Table 1 summarizes the resampling methods that we include in our demonstration: 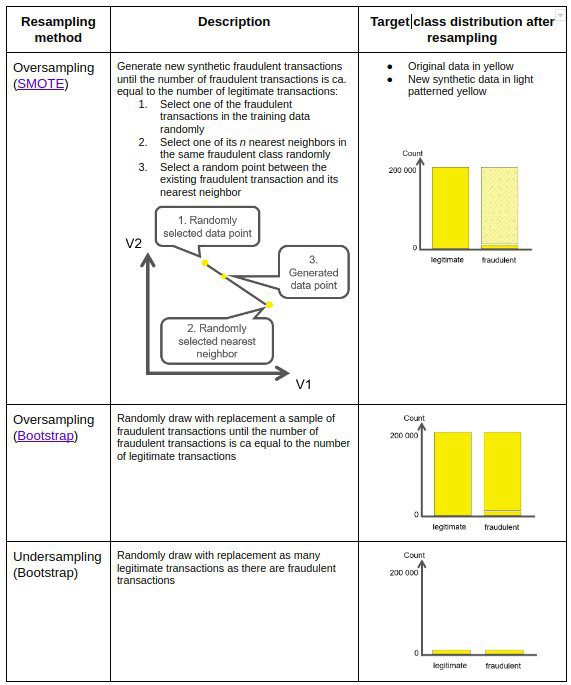 Resampling has two drawbacks, especially when the target class is as highly imbalanced as in our case. Firstly, oversampling the minority class might lead to overfitting, i.e. the model learns patterns that only exist in the particular sample that has been oversampled. Secondly, undersampling the majority class might lead to underfitting, i.e. the model fails to capture the general pattern in the data [3].

We compare the performances of the baseline model and the models trained on resampled data in terms of two scoring metrics: recall and precision (Figure 2). The metrics are explained in detail in the From Modeling to Scoring: Confusion Matrix and Class Statistics blog post.

Figure 2. Recall and precision statistics obtained by four decision tree models for fraud detection, each one trained on a different training set

If you take a look at the performances obtained via oversampling in the two middle rows, you can see from their precision value that these models are raising more false alarms than the model trained on the full original data, while at the same time not improving the recognition of  the pattern underlying the fraudulent transactions. All of this indicates that the model has overfitted the data.

As you can see, our fraud detection model is over-/underfitting when trained on resampled data. What is actually happening under the hood?

Demonstrating Over- and Underfitting in Fraud Detection

Transactions data are confidential, and we can therefore only work with principal components as predictors of the target class fraudulent/legitimate. In order to better understand how a resampled model leads to over- or underfitting, let’s imagine we had some of the following columns in our data, since they often characterize fraudulent transactions [4]:

Since our training data only contain 394 fraudulent transactions, it could be, for example, that the majority of them are characterized by exceptionally many orders of the same item: one for 20 toasters, another for 50 smartphones, yet another for 25 winter coats, and so on. In reality, the fraudulent transactions are much more varying and continuously evolving. On the contrary, the 227451 legitimate transactions in the training data represent a huge variety of ways of using the credit card: for a banana, hotel booking, toaster, car parking, and more!

In the following, we explain how the different resampling methods skew the transactions data, and how this leads to a deterioration in model performance, as we saw before.

The model performs almost perfectly in terms of recall (92%), yet the worst in terms of precision (2%). Since more than 99% of the original transactions are discarded in the undersampling phase, our training data might only consist of credit card transactions for food and leave out hotel bookings, car parking, and many others. This kind of training data is not representative of the real data. Therefore, almost all transactions are predicted as fraudulent; the model is underfitting (Figure 5).

Frauds are perpetrated in a large variety of patterns, and we have only a few fraudulent transactions in our training data. So fraud patterns are definitely under-represented in our training set. Resampling doesn’t solve the problem, because it does not increase the variety of the representation of fraudulent transactions, it just replicates in some form the fraud patterns represented in the dataset. Thus, the models trained on resampled data can only perform well in detecting some types of fraud, the types represented in the training data.

Transactions data are produced in huge volumes every day. In order to build a supervised model for fraud detection, they would need to be labeled. The labeling process, however, in this case, is tricky.

Firstly, even if we had the knowledge to appropriately label fraudulent transactions, the process would be very resource-intensive. Skillful experts at detecting frauds are rare and expensive and usually do not spend their time labeling datasets. Even with reliable and sufficient resources, manual labeling would take a prohibitively long time before a sufficiently large amount of data would be available.

Secondly, expertise in fraud detection is so scarce, because criminals creatively devise ever newer fraud schemes and it is hard to keep up the pace with the newly introduced patterns. An expert might recognize all types of frauds known till then and still fail at recognizing the new fraud schemes, most recently created.

Finally, and luckily, there are generally fewer fraudulent transactions than legitimate transactions. Even after all this manual effort by extremely skillful people, we might still end up with an insufficient number of data for the fraudulent class.

Those are all reasons why fraud detection is often treated as a rare class problem, rather than an imbalanced class problem.

Yet, we can try. With this dataset, can we artificially increase the sample size of fraudulent transactions by resampling the training data? Not really. Resampling can improve the model performance if the target classes are imbalanced and yet sufficiently represented. In this case, the problem is really the lack of data. Resampling is subsequently leading to over- or underfitting rather than to a better model performance.

This article just aims at giving you an idea of why, in some cases, resampling cannot work. Of course, better results could be obtained with more sophisticated resampling methods than those we have introduced in this article, like for example, a combination of under- and oversampling [6]. Better results could also be obtained with supervised algorithms other than the decision tree. Some machine learning supervised algorithms, such as logistic regression, are less sensitive to class imbalance than the decision tree, while other algorithms, such as ensemble models, are more robust to overfitting. Even better results could be obtained with the decision tree, for example by applying pruning techniques to avoid the overfitting effect or controlling the tree growth.

However, sometimes we must accept that the data is just not sufficient to describe the minority class. In this case, we must proceed with unlabeled data and try to isolate the events of the rare class via unsupervised algorithms, such as neural autoencoders, isolation forest, and clustering algorithms.

The Resampling in Supervised Fraud Detection Models workflow, used in this article to show the limitations of resampling, can be downloaded for free from the KNIME Hub.

Bio: Maarit Widmann is a Data Scientist at KNIME.