Learn how EvalML leverages Woodwork, Featuretools and the nlp-primitives library to process text data and create a machine learning model that can detect spam text messages. 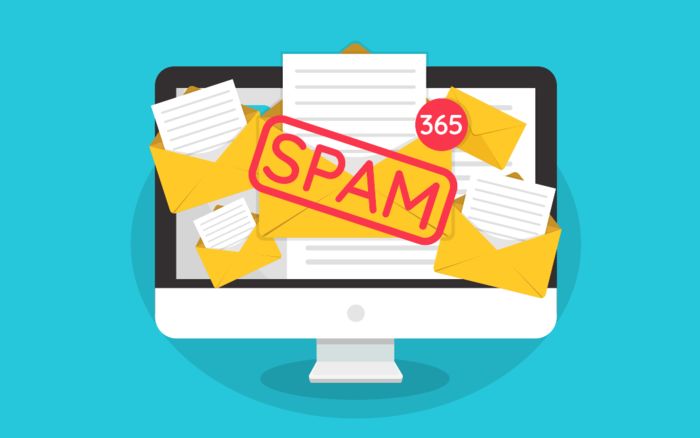 Text can be a rich and informative type of data. It can be used in a variety of tasks, including sentiment analysis, topic extraction, and spam detection. However, raw text cannot be fed directly to machine learning algorithms, because most models can only understand numeric values. Thus, to utilize text as data in machine learning, it must first be processed and transformed to numeric values.

In this post, we will learn how we can use EvalML to detect spam text messages by framing it as a binary classification problem using text data. EvalML is an AutoML library written in Python that uses Woodwork to detect and specify how data should be treated, and the nlp-primitives library to create meaningful numeric features from raw text data.

The dataset we will be using in this demo consists of SMS text messages in English, some of which are tagged as legitimate (“ham”), and others which are tagged as spam. For this demo, we have modified the original dataset from Kaggle by joining all of the input text columns and downsampling the majority class (“ham”) so that the “ham” to “spam” ratio is 3:1. The following references to the data we will be inspecting will always refer to our modified and smaller dataset.

Let’s load in our data and display a few rows to understand what our text messages look like:

A sample of our input data

We can plot the frequency of our target values to verify that the ratio of “ham” to “spam” in our modified dataset is approximately 3:1. 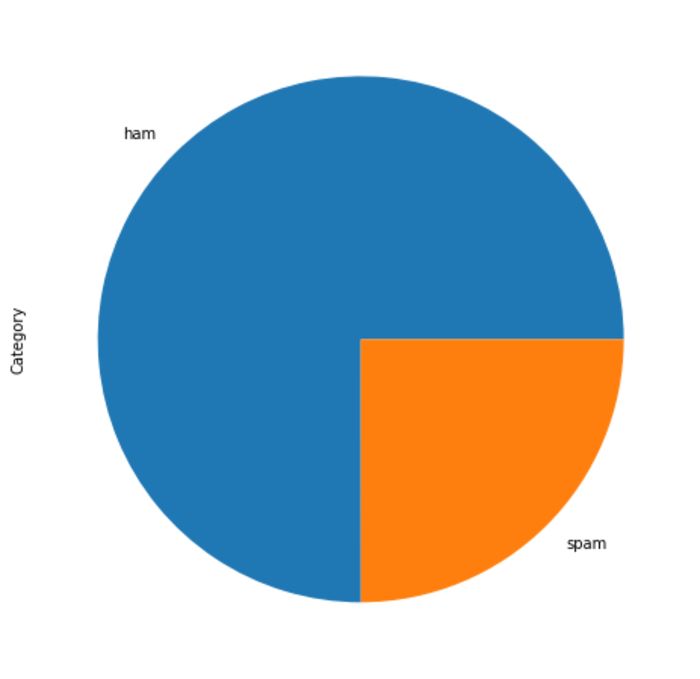 Let’s generate a model using EvalML and see if we can do better than this trivial model!

Before feeding our data into EvalML, we have a more fundamental issue to address: How can we specify that our data should be treated as text data? Using pandas alone, we can't distinguish between text data and non-text data (such as categorical data) because pandas uses the same object data type to store both. How we can make sure that our models correctly treat our text messages as text data, and not as hundreds of different unique categories?

pandas treats “Message” as an “object” data type by default

EvalML utilizes the open-source Woodwork library to detect and specify how each feature should be treated, independent of its underlying physical data type. This means we can treat columns with the same physical data type differently. For example, we can specify that we want some columns that contain text to be treated as categorical columns, while we treat other columns with text as natural language columns, even if these columns have the same underlying object datatype. This differentiation allows us to clear up the ambiguity between features that may have the same underlying datatype in pandas, but ultimately represent different types of data.

Here, we initialize a Woodwork DataTable with our feature. Our single Message feature is automatically detected as a natural language or text column.

We can also initialize a Woodwork DataColumn for our target.

Our target is automatically detected as a categorical column. This makes sense, since we have a binary classification problem with two categories of text messages: spam and ham.

Our target ("y") is automatically detected as a categorical column

First, we will split our data into training and test data sets. We will use the training data set to train and find the best model, and then validate our model’s performance on the test data.

EvalML offers a utility method that makes this easy. All we need to do is specify that we have a binary classification problem, and that we want to reserve 20% of our data as test data.

Next, we can set up AutoMLSearch by specifying the problem type and passing in our training data. Again, we have a binary classification problem because we are trying to classify our messages as one of two categories: ham or spam.

Calling the constructor initializes an AutoMLSearch object that is configured for our data. Now, we can call automl.search() to start the AutoML process. This will automatically generate pipelines for our data, and then train a collection of various models. 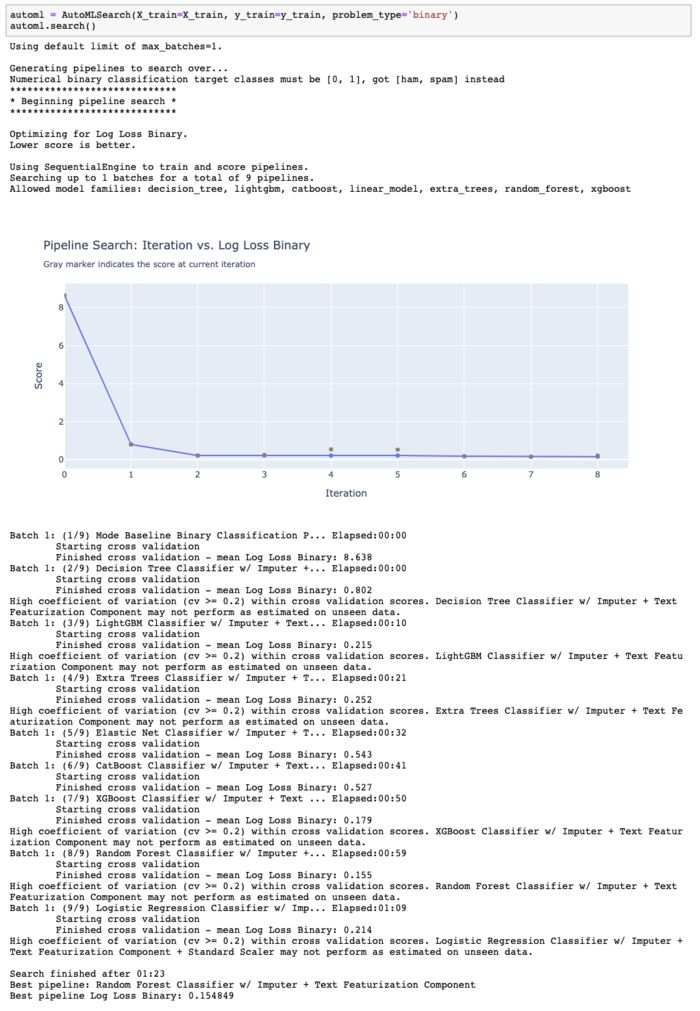 To understand the type of pipelines AutoMLSearch has built, we can grab the best performing pipeline and examine it in greater detail. We can call automl.describe_pipeline(id) to see detailed information about the pipeline’s components and performance, or automl.graph(pipeline) to see a visual representation of our pipeline as a flow of components. 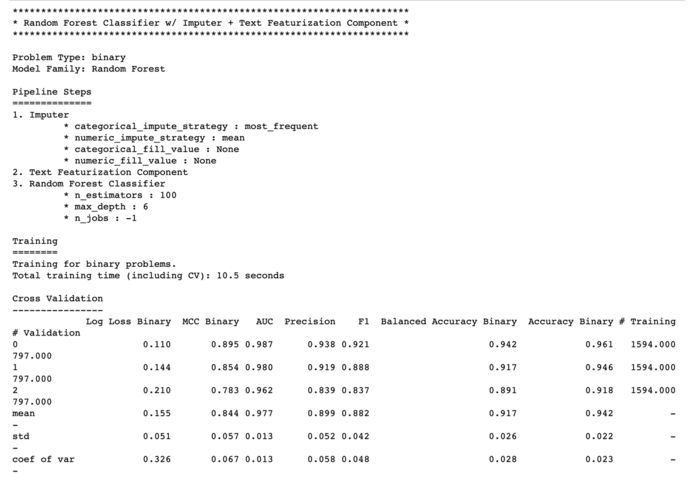 Description of our best pipeline

Graphical representation of our best pipeline

By examining the best performing pipeline, we can better understand what AutoMLSearch is doing, and what pipelines it built with our text data. The best pipeline consists of an Imputer, a Text Featurization Component and a Random Forest Classifier component. Let’s break this down and understand how this pipeline was constructed:

Now, let’s see how well our best pipeline performed on various metrics and if we could beat the baseline trivial model by scoring the pipeline on test data.

Our best pipeline performs much better than the baseline

We have significantly outperformed the baseline model in the three metrics (accuracy, balanced accuracy, and recall) we were focused on! With EvalML, we were able to build a model that is able to detect spam fairly well with just a few lines of code, and even before doing any tuning of the binary classification decision threshold.

The Importance of Text

We previously discussed that Woodwork had automatically detected that our Messages column was a natural language feature. We now understand that AutoMLSearch was able to create a Text Featurization Component because it identified this natural language column. To explain why this was useful, we can manually set our Messages feature as a categorical feature, run the same steps, and compare our scores.

If we score the best pipeline found this time, we get an accuracy score of 75.2%, a balanced accuracy score of 50.3%, and a recall score of 0.6%. These scores are only marginally better than the scores for our baseline model!

This means that unlike the previous best model found, this model is not much better than the trivial baseline model, and is no better than always guessing the majority “ham” class. By observing the components that make up this pipeline, we can better understand why.

Because AutoMLSearch was told to treat “Message” as a categorical feature this time, each pipeline included a one-hot encoder (rather than a text featurization component). The one-hot encoder encoded the top 10 most frequent “categories” of these texts; however, because each text is unique, this means that 10 unique text messages were encoded while the rest of the messages were dropped. Doing this removed almost all of the information from our data, so our best pipeline could not do much better than our trivial baseline model.

Special thanks to Becca McBrayer for writing the demo which this blog post is based on!

Bio: Angela Lin is a software engineer on the team building the open-source EvalML automated machine learning package in Python.