Understand the intuition behind bagging with examples in Python.

In this article, I will go over a popular homogenous model ensemble method — bagging. Homogenous ensembles combine a large number of base estimators or weak learners of the same algorithm.

The principle behind homogenous ensembles is the idea of “wisdom of the crowd” — the collective predictions of many diverse models is better than any set of predictions made by a single model. There are three requirements to achieve this:

When these three requirements are satisfied, adding more models should improve the performance of your ensemble.

In bagging, a large number of independent weak models are combined to learn the same task with the same goal. The term “bagging” comes from bootstrap + aggregating, whereby each weak learner is trained on a random subsample of data sampled with replacement (bootstrapping), and then the models’ predictions are aggregated.

Bootstrapping guarantees independence and diversity, because each subsample of data is sampled separately with replacement and we are left with different subsets to train our base estimators.

The base estimators are weak learners that perform only slightly better than random guessing. An example of such a model is a shallow decision tree limited to a maximum depth of three. The predictions from these models are then combined through averaging. 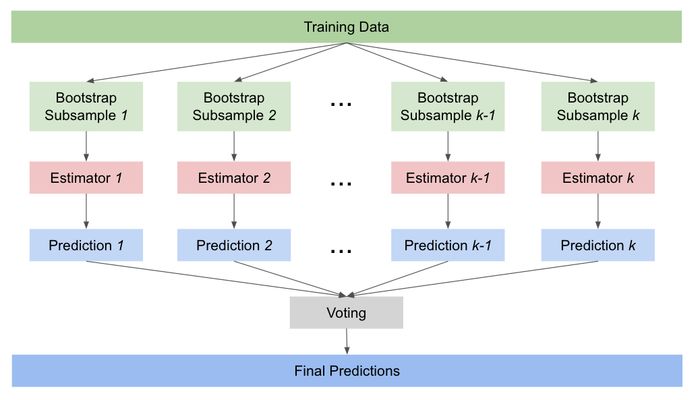 You can build your own bagging algorithm using BaggingRegressor or BaggingClassifier in the Python package Scikit-Learn.

Random forest® is a popular example of a bagging algorithm. It uses averaging to ensemble a number of individual decision trees trained on a subset of the train dataset.

Using scikit-learn’s random forest algorithm in Python, you can specify tree-specific parameters. The following are some important hyperparameters to tune so that it is optimized for your dataset:

Note that scikit-learn’s random forest algorithms will return an error if there are null values in your features, so remember to fill null values with pandas’ fillna before calling fit on your data, otherwise it will throw an error.

Pros and Cons of Bagging

Bagging is based on the idea of collective learning, where many independent weak learners are trained on bootstrapped subsamples of data and then aggregated via averaging. It can be applied to both classification and regression problems.

The random forest algorithm is a popular example of a bagging algorithm. When tuning hyperparameters in the random forest algorithm for your dataset, the important three areas to pay attention to are: i) number of trees (n_estimators), ii) prune the trees (start with max_depth but also explore samples required in a node and/or for splitting), iii) the maximum number of features to consider at each split (max_features).

Bagging is a very powerful concept and example of model ensemble methods. Hope this inspires you to try out a bagging algorithm next time you approach a predictive modeling problem!