Read this article assessing a model performance in a broader context.

Accuracy statistics, such as overall accuracy, quantify the expected performance of a Machine Learning model on new data without any baseline, such as a random guess or existing models.

That’s why we also need visual model evaluation — or scoring — techniques that show the model performance in a broader context: for varying classification thresholds, compared to other models, and also from the perspective of resource usage. In this article, we explain how to evaluate a classification model with an ROC curve, a lift chart, and a cumulative gain chart, and provide a link to their practical implementation in a KNIME workflow, “ Visual Scoring Techniques for Classification Models”.

We use a dataset with 3333 telco customers, including their contract data and phone usage, available on GitHub. The target column “Churn?” shows whether the customer churned ( True ) or not ( False ). 483 customers (14%) churned, and 2850 customers (86%) didn’t churn.

The accuracy statistics of the model are shown in Figure 1. 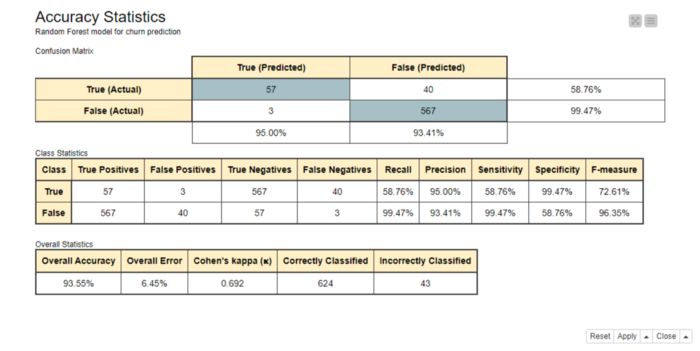 The accuracy statistics are calculated based on the actual and predicted target classes. The predicted classes, here True and False, are based on class probabilities (or scores) predicted by the model, ranging between 0 and 1. In a binary classification problem, the model outputs two probabilities, one for each class. By default, the class with the highest probability determines the predicted class, which in a binary classification problem means that the class with a probability above 0.5 gets predicted. However, sometimes a different classification threshold can lead to a better performance. If this is the case, we can find it out in an ROC curve.

measures the proportion of the customers who didn’t churn, but were incorrectly predicted to churn. This equals 1-specificity .

measures the proportion of the customers who churned, and were correctly predicted to churn. This equals sensitivity .

The first point of the ROC curve in the bottom left corner indicates the false positive rate (FPR) and true positive rate (TPR) obtained using the maximum threshold value 1.0 . With this threshold, all customers with probability P(Churn=True) > 1.0 will be predicted to churn, that is none. No customers are predicted to churn either correctly or incorrectly, and therefore FPR and TPR are both 0.0.

The second point in the ROC curve is drawn by decreasing the threshold value, for example by 0.1. Now all customers with P(Churn=True) > 0.9 will be predicted to churn. The threshold is still high, but it is now possible that some customers will be predicted to churn, therefore producing small non-zero values of TPR or FPR. So, this point will be located in the ROC curve close to the previous point.

The third point is drawn by decreasing the threshold value some more, and so on, till we reach the last point in the curve drawn for the minimum classification threshold 0.0 . With this threshold, all customers are assigned to the positive class True , either correctly or incorrectly, and therefore both TPR and FPR are 1.0.

A perfect model would produce TPR=1.0 and FPR=0.0. On the opposite, a random classifier would always make an equal number of correct and incorrect predictions into the positive class, which corresponds to the black diagonal line where FPR=TPR. This line is reported in each ROC curve as a reference for a useless model.

Notice that a model can of course perform worse than the random guess, but that might be a mistake of the data scientist rather than the model! It would be enough to take the opposite of the model decision to implement a better performing solution.

Figure 2 shows an ROC Curve, drawn for the Random Forest model for churn prediction. Notice the black line corresponding to the random guess.

true positives for each false positive, when we use the optimal classification threshold, as shown in Figure 2.

If we compare these numbers to the class statistics in Figure 1, we can see that, after optimizing the classification threshold, the sensitivity increases quite a lot from 59% to 85%, while specificity decreases only a bit from 99% to 1–0.05= 95%.

An ROC curve is also useful for comparing models. Let’s train another model, a Decision Tree, for the same churn prediction task and compare its performance with the Random Forest model.

Figure 3 shows two ROC curves in the same view. The blue curve is for the Random Forest model and the orange curve is for the Decision Tree. A curve closer to the top left corner, in this case the blue curve of the Random Forest model, implies better performance. The view also shows the Area under the Curve (AuC) statistics for both models in the bottom right corner. It measures the area underlying each ROC curve and allows for a more refined comparison between the performances.

Figure 3. ROC curves of two models — a Random Forest and a Decision Tree — for churn prediction. The model which reaches closer to the top left corner and has a greater AuC statistics performs better.

Saving resources with a model

Besides getting accurate predictions, we can also save resources with the model. In our example of churn prediction, some kind of an action follows the prediction, and the action requires resources, such as less revenue or more time investment. A model can help us to use the resources more efficiently: contact fewer customers but still reach more of the customers who are likely to churn.

The lift and cumulative gain charts compare the resource usage against the correct predictions.

A lift chart compares the number of target customers — here the customers who churn — reached in a sample that has been extracted based on the model predictions vs in a random sample.

Figure 4. Lift chart shows the ratio of target customers reached in a sample which is drawn based on the model predictions vs in a random sample.

Figure 5 shows the cumulative gain chart for the Random Forest model. If we follow the curve, we can see that if we only sample 10% of the customers, those with the highest probability (x-axis), we expect to reach around 60% of all customers who churn (y-axis). If we sample 20% of the customers, again those with the highest probability, we expect to reach more than 80% of all customers who churn. This point also has the closest tangent to the top left corner. With this number of sampled customers, the average sample size required to reach one target customer is the lowest.

Figure 5. Cumulative gain chart shows which proportion of target customers we reach when we contact 10%, 20%, …, 100% of the customers ordered by their positive class probability.

Table 1 collects the techniques described above and summarizes what they report about the model’s performance. These visual techniques complement the accuracy statistics in that they show the optimal classification threshold, compare the performance to a random guess, compare multiple models in one view, and indicate the optimal sample size and quality.

These visual techniques complement but don’t replace the accuracy statistics. For a comprehensive model evaluation, it’s good to take a look at both.

Table 1. Summary of the visual evaluation techniques for a classification model.

KNIME Analytics Platform provides a Binary Classification Inspector node that can be used to compare the accuracy statistics and ROC curves of multiple models and also find the optimal classification threshold. Its interactive view (Figure 6) shows:

Figure 6. Binary classification inspector node’s interactive view displays a bar chart for accuracy statistics, ROC curve, confusion matrix, and distribution of positive class probabilities in one view for one or more classification models. All views will be updated when the slider widget is used to adjust the classification threshold.

The top part of the Binary Classification Inspector node’s view shows a bar chart for accuracy statistics and an ROC curve. Each model is displayed by a different color, here green for the Random Forest model and blue for the Decision Tree. We can select one of the models for a more detailed inspection by clicking on a colored bar. We’ve selected the Random Forest model in Figure 6. The bottom part of the view activates and shows the confusion matrix and the distribution of the positive class probabilities for the selected model. The orange vertical line shows the current classification threshold.

Binary classification inspector view and the visual model evaluation techniques introduced in this article are implemented in the “ Visual Scoring Techniques for a Classification Model” workflow (Figure 7). You can inspect and download it for free from the KNIME Hub.

Figure 7. A KNIME workflow to build a churn prediction model and evaluate it with visual techniques.

Bio: Maarit Widmann is a data scientist in the evangelism team at KNIME; the author behind the KNIME self-paced courses and a teacher in the KNIME instructor-led courses.

As first published in Low Code for Advanced Data Science.