Onalytica gives us a new list of the top 100 Artifical Intelligence and Machine Learning influencers and brands, and provides some insight into the relationships between them.

Onalytica, a firm which specializes in social network analysis and influencer relationship software, recently released their latest Top 100 Artificial Intelligence and Machine Learning Influencers and Brands Report. The report lists the top 100 in each category, and goes on to graphically explore the relationships between them.

The report's website shares a list of the top 50 in each category (influencers and brands), while the downloadable full report contains the top 100. As a taste of what to expect, here is a list of the Top 20 Influencers:

Below is a graph of the relationships between the top influencers (a similar graph exists on Onalytica's website for top brands). Click to enlarge. 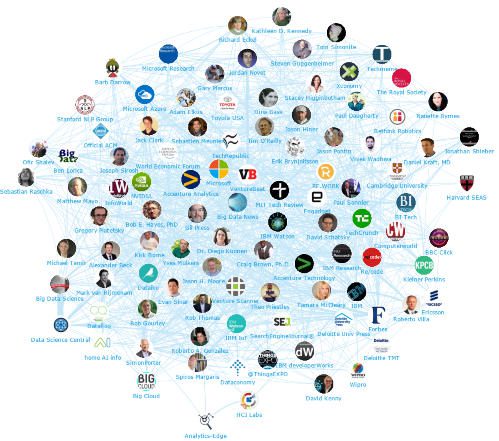 Onalytica reached out to some of the top influencers for some insight into their views on the subjects of AI and machine learning, and included some of this insight on their post. Kirk Borne, Principal Data Scientist with Booz Allen Hamilton and #2 ranked influencer, had this to say:

KDnuggets' own Gregory Piatetsky-Shapiro had the following to say:

Past “experts” who said that AI will not defeat human chess master, or human chess champion, or will not recognize images, etc, have all been proven wrong. There do not seem to be any barriers to what AI and Machine Learning can achieve. Now is the time to take AI seriously and consider immense benefits but also huge risks from a human-level AI.

And Randal Olson, Postdoctoral Researcher at the University of Pennsylvania Institute for Biomedical Informatics, shares the following:

With DeepMind’s AlphaGO taking on a world expert Go player, Boston Dynamics’ bipedal robot (Atlas) marching into the robotics scene, and so much more, 2016 is looking to be a groundbreaking year for artificial intelligence and machine learning.

The full report can be downloaded from Onalytica's website.