In this post, we present a list of popular data science leaders on LinkedIn. Follow these leaders who will keep you in touch with the latest Data Science happenings! 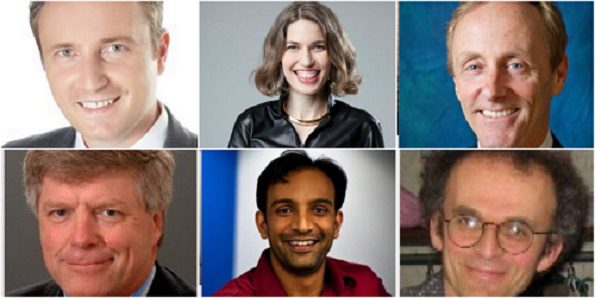 Bernard is a frequent contributor to the World Economic Forum, writes for Forbes, is recognized by the CEO Journal as one of today's leading business brains and by LinkedIn as one of the World's top 5 business influencers. He writes on big data and leadership. In his last post, he picks interesting quotes and describes about what not to do as a leader Are These The Worst Leadership Quotes Of All Time?.

Josh Bersin founded Bersin & Associates, LLC in 2001 and also serves as its Principal and CEO. He is a Frequent Speaker at industry events, a regular contributor to leading training and HR publications, and the author of "The Blended Learning Book: Best Practices, Proven Methodologies, and Lessons Learned" (October 2004, Pfeiffer). He published research by Bersin & Associates covers areas such as leadership development, training measurements, and performance management.

Tim O'Reilly is the founder and CEO of O'Reilly Media Inc. His original business plan was simply "interesting work for interesting people," and that's worked out pretty well. He publishes books, runs conferences, invests in early-stage startups, urges companies to create more value than they capture, and tries to change the world by spreading and amplifying the knowledge of innovators.

DJ Patil is the first Chief Data Scientist of the USA. He previously served as the VP of Product at RelateIQ, as Chief Product Officer of Color Labs, and as Head of Data Products and Chief Scientist of LinkedIn. He notably co-authored HBR 2012 article with Thomas Davenport “Data Scientist: The Sexiest Job of the 21st Century”. The term data scientist, coined in 2008, has often been credited to Patil and Jeff Hammerbacher, who back then were leads of data and analytics efforts at LinkedIn and Facebook respectively. DJ frequently shares content on LinkedIn.

Tomasz Tunguz is a Partner at Redpoint Ventures where he works with Axial, Looker, Electric Imp, Expensify, ThredUp, Quantifind and Erply. He writes data-driven blog posts about key questions facing startups including how to fund raise, startup benchmarks, management best practices and team building. Prior to joining Redpoint, Tomasz was the Product Manager for Google's Social Media monetization team, including the Google-MySpace partnership.

Hilary Mason is CEO and Founder of Fast Forward Labs, an independent data technology research lab. She is also Data Scientist in Residence at Accel Partners, a leading Silicon Valley venture capital firm. A genuinely charming speaker who resonates with both tech and nonspecialist audiences, Hilary speaks about the challenges and the rewards of working with big data, with a special focus on machine learning.

Josh founded Domo in 2010 to transform the way CEOs and other executives manage their business and to help drive value from the tens of billions of dollars spent on traditional business intelligence systems. Prior to Domo, Josh served as CEO of Omniture, a SaaS-based web analytics company that he co-founded in 1996 and took public in 2006.

Tom Davenport is Distinguished Professor of Information Technology and Management at Babson College, co-founder of the International Institute for Analytics, a Fellow of the MIT Center for Digital Business. An information management pioneer, Tom has published on the topics of analytics in business, process management, information and knowledge management, and enterprise systems. He pioneered the concept of “competing on analytics” with his best-selling 2006 Harvard Business Review article (and his 2007 book by the same name).

In his recent post on LinkedIn, Automation ready to replace the Mad Men style of marketing, Tom writes "Automation is critical in these domains because there are too many marketing decisions involving too many complex variables and too much data for humans to make effectively without aid".

Gregory I. Piatetsky-Shapiro is a data scientist, co-founder of KDD conferences and ACM SIGKDD association for Knowledge Discovery and Data Mining, and President of KDnuggets. Gregory is the founder of Knowledge Discovery in Database (KDD) conferences. He has a strong presence on Twitter & LinkedIn data science related groups with content focusing on data science news, analytics and up to date technologies. Dr. Gregory is passionate about delivering the latest news, trends & happenings in data science and regularly shares content among the LinkedIn community.

In his latest post on Linkedin,90+ upcoming May – December Meetings in Analytics, Big Data, Data Mining, Data Science, check out information about conferences & meetings to network with practitioners and expand your knowledge in data science.

Carla has worked in the field of data science for over 15 years, and has worked for Fortune 100 and 500 companies such as Johnson & Johnson, Hershey, Kraft, Kellogg’s and Firestone. Gentry is also a prolific tweeter with a sharp eye for news and trends that will have an impact on the industry. Carla says "You see "numbers", I see the future for a great customer experiences. The possibilities that data mining, semantic and sentiment can bring from structured and unstructured data is limitless, your data is the voice of the customer, are you paying attention, I know I am."

Dr. Kirk Borne is a data scientist and an astrophysicist. He is Principal Data Scientist in the Strategic Innovation Group at Booz-Allen Hamilton since 2015. He was Professor of Astrophysics and Computational Science in the George Mason University (GMU) School of Physics, Astronomy, and Computational Sciences during 2003-2015. He served as undergraduate advisor for the GMU Data Science program and graduate advisor to students in the Computational Science and Informatics PhD program. Prior to that, he spent nearly 20 years supporting NASA projects, including NASA's Hubble Space Telescope as Data Archive Project Scientist, NASA's Astronomy Data Center, and NASA's Space Science Data Operations Office.

There is more to the data science leaders list like Lutz Finger (6380+) and Jeff Hammerbacher (5377+) who are popular on LinkedIn or other social media platforms. Some of the other lists based on which this list was validated for LinkedIn follower count are :

Share your thoughts with us and write in the comments below about the data science leaders you follow!