Linear regression is a simple algebraic tool which attempts to find the “best” line fitting 2 or more attributes. Read here to discover the relationship between linear regression, the least squares method, and matrix multiplication.

By Matthew Mayo, KDnuggets on November 24, 2016 in Algorithms, Linear Regression

Regression is a time-tested manner for approximating relationships among a given collection of data, and the recipient of unhelpful naming via unfortunate circumstances.

The relationship between response and predictor variables (y and x, respectively) can be expressed via the following equation, with which everyone reading this is undoubtedly familiar:

m and b are the regression coefficients, and denote line slope and y-intercept, respectively. I suggest you check your elementary school algebra notes if you are having trouble recalling :)

The equation for multiple linear regression is generalized for n attributes as follows:

It is often confusing for people without a sufficient math background to understand how matrix multiplication fits into linear regression.

One method of approaching linear analysis is the Least Squares Method, which minimizes the sum of the squared residuals. Residuals are the differences between the model fitted value and an observed value, or the predicted and actual values. The exercise of minimizing these residuals would be the trial and error fitting of a line "through" the Cartesian coordinates representing these values.

One way to proceed with the Least Squares Method is to solve via matrix multiplication. How so? The mathematics which underlie the least squares method can be seen here, while a short video with example is shown below.

If you are interested in a video with some additional insight, a proof, and some further examples, have a look here. A number of linear regression for machine learning implementations are available, examples of which include those in the popular Scikit-learn library for Python and the formerly-popular Weka Machine Learning Toolkit.

The least squares method can more formally be described as follows:

We then set up the matrix equation:

where matrix Y contains the Y values, matrix X contains a row of 1s and along with the X values, matrix A consists of the Y-intercept and slope, and matrix E is the errors. Note the row of 1s in matrix X are needed to allow multiplication with matrix A (2 rows and 2 columns, respectively).

We then solve for A, which is:

This is the matrix equation ultimately used for the least squares method of solving a linear system.

The following is a sample implementation of simple linear regression using least squares matrix multiplication, relying on numpy for heavy lifting and matplotlib for visualization.

A particular run of this code generates the following input matrix:

and solving results in this projection matrix, the values of which are the y-intercept and slope of the regression line, respectively:

This solution is visualized below. 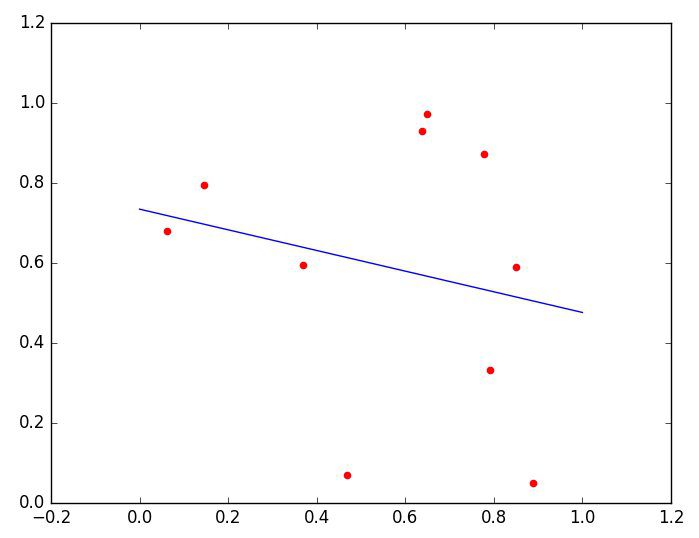 Of course, in the context of machine learning, data instances of unknown response variable values would then be placed on the regression line based on their predictor variables, which constitutes predictive power.

Linear regression is an incredibly powerful prediction tool, and is one of the most widely used algorithms available to data scientists.