5 Things You Need To Know About Data Science

Here are 5 useful things to know about Data Science, including its relationship to BI, Data Mining, Predictive Analytics, and Machine Learning; Data Scientist job prospects; where to learn Data Science; and which algorithms/methods are used by Data Scientists

Business Intelligence or BI is primarily concerned with data analysis and reporting, but does not include predictive modeling, so BI can be considered a subset of Data Science.

Data Science is concerned with analyzing data and extracting useful knowledge from it. Building predictive models is usually the most important activity for a Data Scientist.

However, because "Data Science" term is relatively new, the name is not commonly accepted yet, and other names are frequently used for the same area. 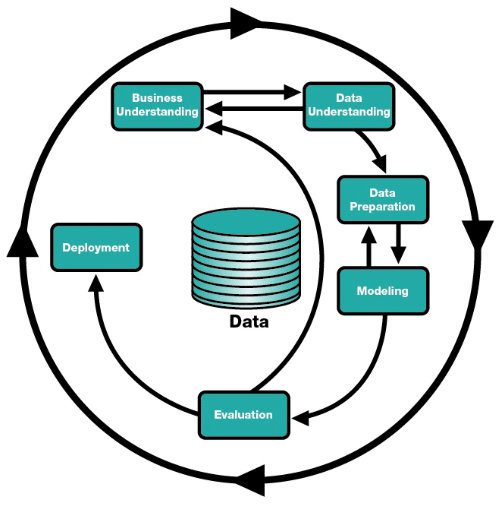 Within the scientific community, the most popular name for this field has changed over time This Google Trends chart shows the relative change in popularity of 5 Data Science related terms from 2004 to 2017.

2. Data Science vs Machine Learning: What are the differences?

Data Science and Machine Learning can be thought of as close cousins.

What they have in common is supervised learning methods - learning from historical data.

However, Data Science is also concerned with Data Visualization and presenting results in the form understandable to people. Data Science has much bigger focus on Data Preparation and Data Engineering. 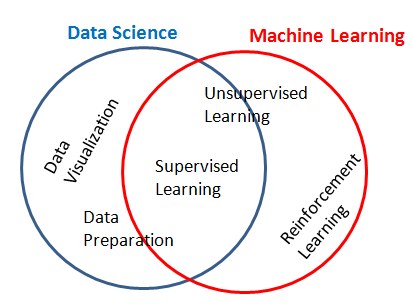 Machine Learning main focus is on the learning algorithms - it is not concerned, for example, with data visualization. Machine Learning studies not only learning from historical data, but also learning in real-time. A major part of ML are the algorithms for agents acting in the environment and learning from their actions. This is called Reinforcement Learning (RL). To learn more about history and current state of RL, see my Interview with Rich Sutton, the Father of Reinforcement Learning.

RL was the key part of the recent success of AlphaGo Zero and AlphaZero.

Yes! Data Scientist was ranked by Glassdoor as the best job in America for 3 years in a row - see

4. Where can I learn Data Science?

Data Science Education is one of the most popular topics on KDnuggets, with a whole section dedicated to it.

There are many options for learning data science and related topics.

We have recently done a series of surveys of Best Masters in Analytics, Data Science, examining also tuition and ranking of the program. See Here is an overview chart of the top ranked programs from the first post: 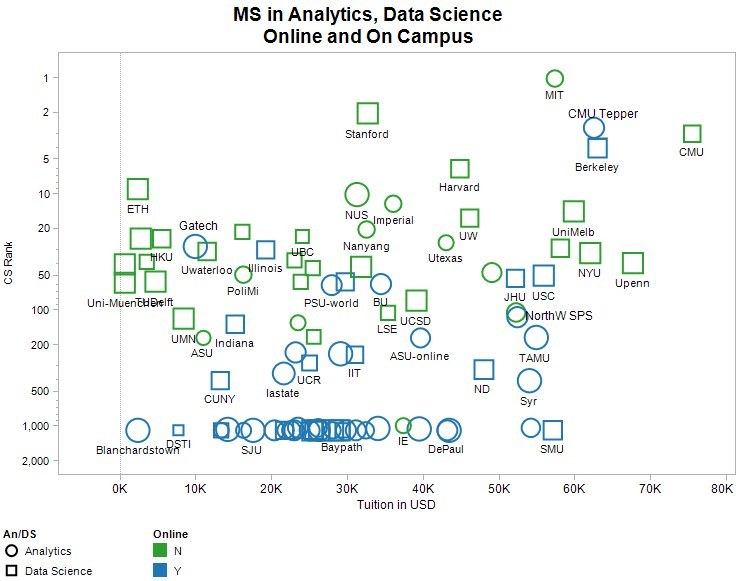 MS in Analytics, Data Science - Online and On Campus from this post

Symbol color is blue for online, green for on-campus; shape is circle for MS in Analytics; square for MS in Data Science.

We note that there is little correlation between ranking and tuition. Most high-ranking universities do NOT offer online degrees. Berkeley and CMU are the exceptions.

Slightly over half of MS degrees we surveyed are called "Data Science" - most of them are technical oriented, and slightly less than half are called "Analytics" - mostly business oriented.

5. What algorithms and methods does Data Scientist use?

Which Data Science / Machine Learning methods and tools you used in the past 12 months for a real-world application?

had these top 10 results: 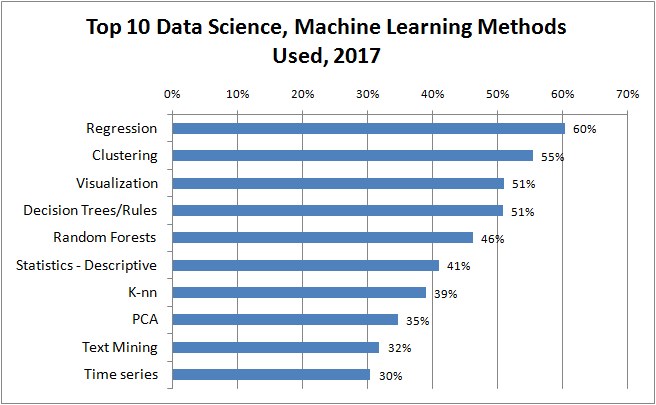 Deep Learning was used by about 20% of respondents.

Our poll also found which methods were most affiliated with industry: The most "academic" methods are advanced topics related to Deep Learning: In Kaggle 2017 Survey The State of Data Science & Machine Learning the most common Data Science methods used at work were: To learn more about most important algorithms, see our most popular posts on algorithms and KDnuggets Posts tagged